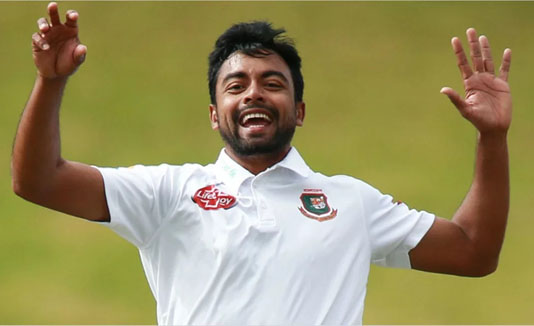 Fast bowler Abu Jayed Rahi and off-spinner Nayeem Hasan claimed four wickets apiece as Bangladesh shot Zimbabwe out for  265 in its first innings of the solitary Test at Sher-e-Bangla Nationa lCricket Stadium on Sunday.Rahi finished with 4-71, his career best bowling in an innings so far while Nayeem conceded 70 for his four-for. Leading spinner Taijul Islam who
was off colour on day one, ended with 2-90.
Resuming the day two on 228-6, Zimbabwe was able to add just 37 runs to their overnight total with Rahi and Taijul taking the rest of the four
wickets.
While the lower order batsmen found it tough to deal with Rahi and Taijul in the morning session of the day two, Regis Chakabva was the only one who
could offer genuine resistance.
Chakabva made 30 with the help of three boundaries before being dismissed by Taijul Islam as the last batsman.
Stand-in captain Craig Ervine was the highest scorer for Zimbabwe with 107 while opener Prince Masvaure made 64, reports BSS.