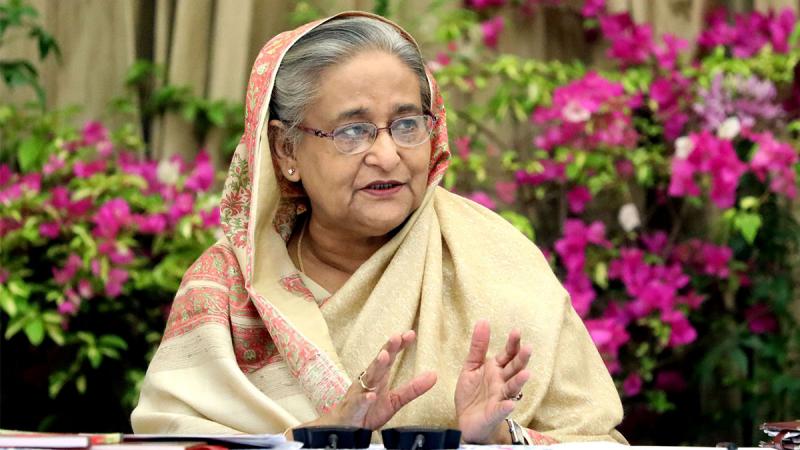 Dhaka, Mar 1 (UNB) :  Prime Minister Sheikh Hasina on Monday urged insurance companies to take initiatives so that the level of awareness among people could be raised over the benefits of opening insurance policies.“There’s a lack of awareness among people about the facilities of insurance. I hope that those who are involved in the insurance sector will take initiatives so that awareness among people could be increased,” she said.
The Prime Minister said this while addressing the National Insurance Day 2021 held at Bangabandhu International Conference Center (BICC). She joined the programme virtually from her official residence Ganobhaban.
The theme of this year’s National Insurance Day is ‘Mujib Borsher Ongikar, Bima Hok Sobar’.
Sheikh Hasina said if awareness can be built then people would go for opening various types of insurance policies. “For this, widespread publicity is urgently needed.”
Sheikh Hasina said there should be huge health insurance facilities in the country as people are not much aware of such insurance activities till now.
“Once the coronavirus pandemic is over, I think, such awareness will be created among people in this regard,” she said.
The Prime Minister put emphasis on building more confidence in the insurance sector through increased implementation of the steps taken by the Insurance Development and Regulatory Authority (IDRA).
Hasina said the importance of insurance will increase with the expansion and strengthening of the country’s economy.
The Prime Minister underlined the need for appropriate settlement of insurance claims and said the people concerned have to remain alert about the false claiming of insurance money.
“There were some instances of claiming excessive money other than the actual losses from the insurance companies…you must remain alert regarding this,” she said.
Talking about the development of the insurance sector, she said the government would send some people to get academic degrees from abroad in actuary. The government will pay for their studies but they have to return to the country on completion of their studies and work.
“Five people have been selected for this and they will return and work for the development of the insurance sector,” she said.
An actuary calculates the risk factors of clients by analysing their age, sex, occupation and heath condition and the insurance company sets premiums for customers based upon the risk factors.
Sheikh Hasina highlighted the involvement of Father of the Nation Bangabandhu Sheikh Mujibur Rahman in the insurance sector. She said Bangabandhu had worked in the insurance industry alongside doing politics to meet his livelihood expenses.
After independence, Bangabandhu enacted necessary laws and formed institutional bodies to make the insurance industry more vibrant, she said.
Hasina also elaborated the government’s initiatives for the development of the insurance industry and said the Insurance Act, 2010 was formulated in place of the old law of 1938, while the National Insurance Policy 2014 was also formulated.
Besides, the government constituted the Insurance Development and Regulatory Authority, 2010 to give the industry an institutional shape, she added.
Referring to a Tk 632-crore project for the development of the country’s insurance sector, she mentioned the government in collaboration with the World Bank is implementing it to bring all insurance companies under the automation system.
Finance Minister AHM Mustafa Kamal, Bangladesh Insurance Association president Sheikh Kabir Hossain and senior secretary of Financial Institutions Division of Finance Ministry Mohammad Asadul Islam also spoke at the programme.
Earlier, the Finance Minister, on behalf of the Prime Minister, distributed Bima Padak among the recipients for their contributions to the insurance sector and Bangabandhu Education Insurance Certificates among the students.