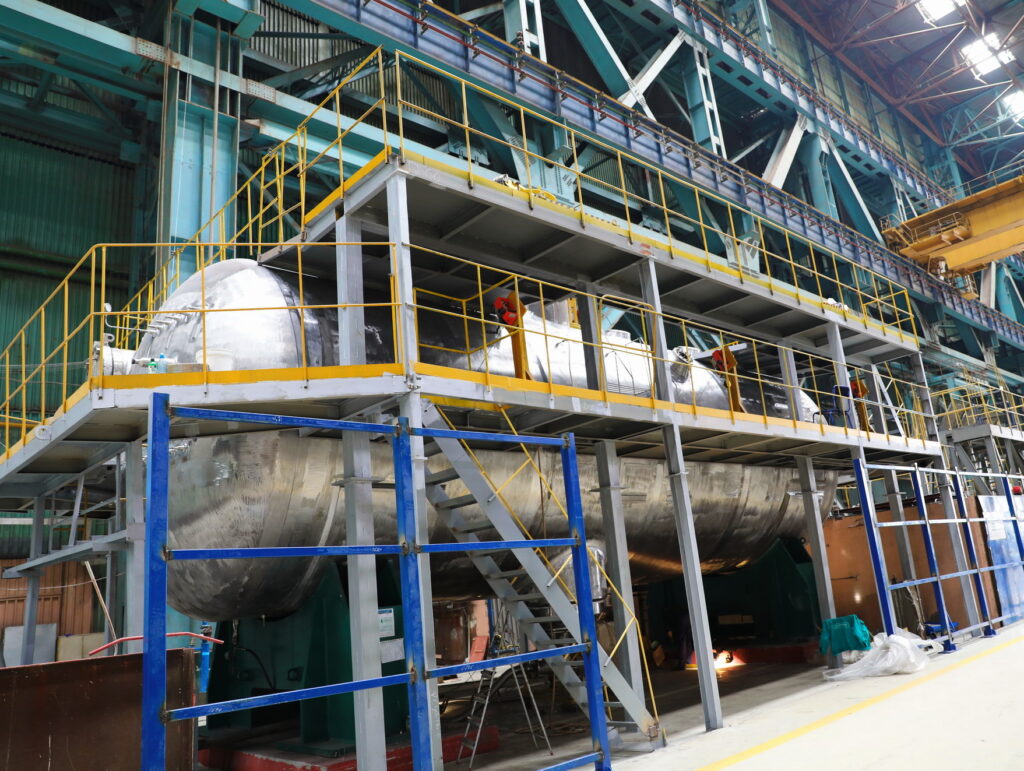 While construction works at the Rooppur Nuclear Power Plant site is progressing as scheduled, manufacturing and testing of various equipment for the plant are running in full swing in Russia. Recently as part of technical control, hydraulic tests of Reactor Pressure Vessel (RPV) and the first Steam Generator for the unit-1 of Rooppur Nuclear Power Plant have been completed in the Volgodonsk Branch of “AEM-technology” “Atommash” in Russia. The tests confirmed the strength and tightness of base metal as well as of weld joints of both, which belong to items of first safety class in a nuclear power plant.
After having been fully sealed, the 11-meter-tall RPV was tested in an underground Caisson. The RPV was filled with distilled water, which was heated up to 100 degrees Celsius and a maximum pressure of 24.5 MPa (1.4 times higher than the working pressure) was built up for testing.
Reactor Pressure Vessel is a vertical cylindrical vessel with an elliptical bottom and contains a reactor core and the Internals.
Similarly, in another testing all holes of the Steam Generator were closed with special blind covers.
Primary and secondary circuits of the Steam Generator were filled with distilled water. The primary circuit was tested at a pressure of 24.5 MPa and water temperature of 350 degrees Celsius. The secondary circuit was tested at a pressure of 11.45 MPa and water temperature of 300 degrees Celsius. In both cases, the pressure was 1.4 times higher than the operating pressure.
The Steam Generator is a heat exchanger which is 14 meters in length, more than 4 m in diameter, and weighs 350 tons. The Unit-1 of Rooppur NPP will have four such Steam Generators.
Earlier in the same factory, welding of Steam Generator bottom – final manufacturing stage was completed. Before welding Steam Generator vessel was fed with SG tubes. The automatic welding of the bottoms was performed at a temperature of 120-190 degrees for 5 days. The welding of two joints uses 700 kgs of wire and 900 kgs of flux.
On the other hand, “AEM-technology” “Petrozavodskmash” completed assembly and welding of ring weld joints of four main coolant pumps for unit-1 of Rooppur NPP). Coolant Pumps (RCP) at a nuclear power plant helps coolant circulation from the reactor to the steam generators and operates under a coolant pressure of 160 atmospheres and at temperature of 300 degrees Celsius. A Coolant Pump weighs more than 31 tons and 3.5 meters in height and more than 3 meters in width. Each unit of Rooppur NPP will have four such Coolant Pumps. In the next stage, RCP bodies will undergo heat treatment and hydraulic tests.
“AEM-technology” is a part of “Atomenergomash” – machine-building division of ROSATOM, Russia’s state atomic energy corporation. It has two branches “AEM-technology” “Petrozavodskmash” in Petrozavodsk and “AEM-technology” “Atommash” in Volgodonsk.
Atomenergomash is a single-source supplier of all the equipment of the Rooppur NPP reactor compartment and a significant part of the turbine hall equipment.
Rooppur NPP will have two power units each of 1,200 MW capacities. Each unit will be equipped a latest Russian generation 3+ VVER-1200 reactor. – Press release