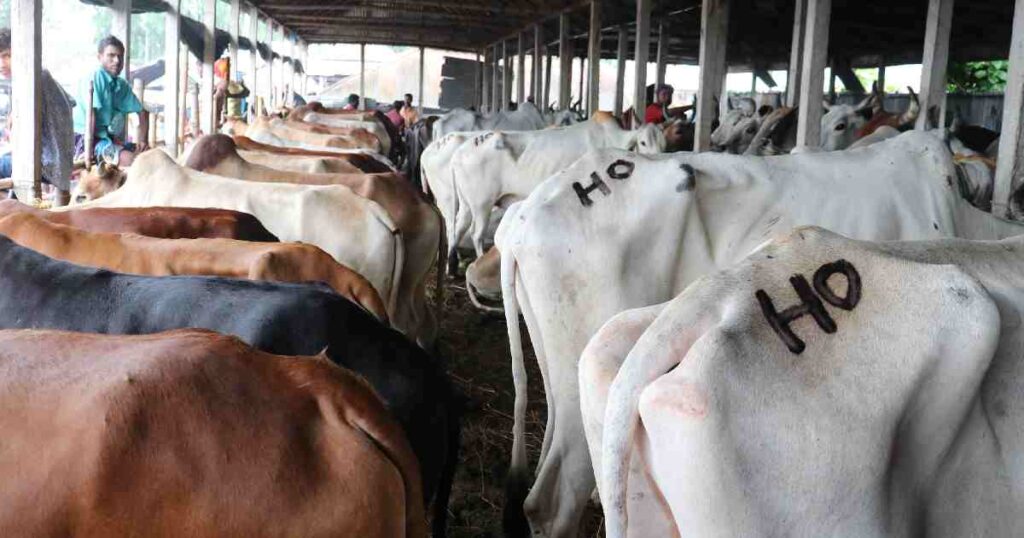 Kurigram, July 20 – Cattle markets in Kurigram border area are seeing an increased arrival of illegally imported cows and buffaloes from India. These cattle are being smuggled in through the transboundary rivers shared by the two nations taking advantage of floods that have overspilled their banks. This has happened even though the authorities have warned the Upazila administrations to prevent cattle smuggling. Local dairy and livestock farmers are worried that they might not get a fair price in a distorted market due to cattle smuggling.
Indian cows and buffaloes are being smuggled inside the country by floating them through Daikhawa, Saheberalga, Narayanpur, Ralakata, Kachakata and several other points of the Brahmaputra and Dudhkumar rivers in Kurigram every day. Cattle smuggling has increased exponentially in the wake of the floods ahead of the Eid-ul-Azha in Bangladesh.
At Jatrapur local market, 50 to 60 ad hoc local representatives of the Indian sellers are active in trading cattle and they put up 400-500 Indian cows alongside 200-300 buffaloes every day as the market opens.
Indian cattle are marked on their bodies with the initials of the owners before they are floated down the rivers across the border.
Abdul Quader, a cattle trader of Char Kali said while Indian traders float cows, their staff wait in rafts to intercept the cows. “They grab the cows and handover to us.” “We sell the cattle and send the money back keeping an amount as commission,” he said.
Hafizur Rahman, a cattle trader from Jatrapur, said many cows fail to make it due to the onrush of flood waters.
Vutru Mia, a cattle trader from Chapainawabganj, said the price of Indian cattle is much lower than last year. “The cow that cost Tk 1 lakh last year, is available for Tk 70-80 thousand now.”
That may bring down the price of the local cows as well, below a fair level.
However a representative of the Jatrapur haat lessee claimed that the smuggling has rather decreased, due to tighter security at the border. “The Indian cattle that are being sold were brought from India long ago…local farmers raised those and are selling them in the market,” he said, identifying himself as Johnny Sheikh.
BGB forces seized 168 illegally imported cows from Kurigram border areas in the month of June. News Desk with UNB