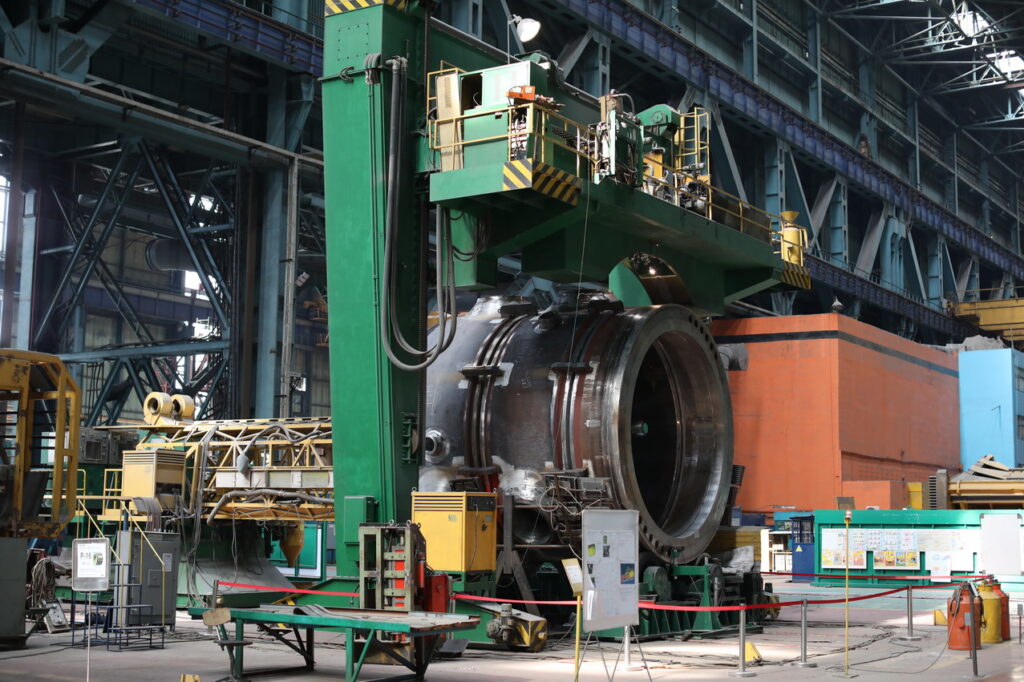 As part of manufacturing process, assembling of the upper semi-vessel of the reactor for Unit -1 of Rooppur Nuclear Power Plant has been completed recently at the Volgodonsk Branch of JSC AEM-technology Atommash in Russia. The company under Atomenergomash, the machine-building division of Rosatom is engaged in manufacturing of reactors with internal equipment, sets of steam generators and considerable part of turbine island equipment for two units of Rooppur project.
The said structure consists of three components – two shells and a flange. The shells were assembled with the help of a special equipment having a lifting capacity of 180 tons. Then the upper reactor semi-vessel was installed on a welding unit for anticorrosive overlaying of the area separating the rings and necessary welding. A total of 300 kg of wire and 400 kg of flux were used for the overlaying only.
The reactor is a vertical cylindrical vessel with an elliptical bottom housing the core and other internal equipment. On its top it is closed with a tightly sealed lid. The lid has installed mechanism and devices for regulating and protection of the reactor as well as exit pipes for cables from detectors for internal control. In the upper part of the vessel there are inlet and exit pipes for coolant supply and removal as well as inlet pipes for emergency supply of coolant at the event of depressurization due to any leak in the circuit.
The Rooppur NPP is designed and being constructed by ROSATOM. The plant will host two units with generation 3 plus VVER-1200 reactors, and will have a life cycle of 60 years with a provision of extending by another 20 years. Each unit will have an electricity generation capacity of 1200 MW. First unit 1 is expected to be commissioned in 2023 and the second in 2024. – Press release