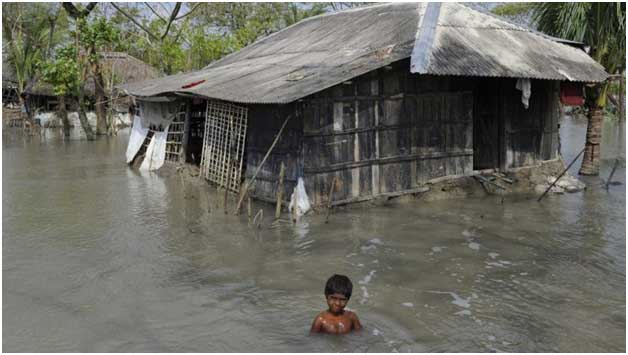 By Andrew Norton
London, Sep 20 2019 (IPS) – In an alarming imbalance struggling families in rural Bangladesh spend almost US$2 billion a year on preventing climate-related disasters or repairing damage caused by climate change ― far more than either the Bangladesh government or international bodies.

In the first report to measure household spending on climate change in any country compared to public climate finance, the International Institute for Environment and Development (IIED) reveals that rural families in Bangladesh, many of whom are living in poverty, are spending double the amount of the government, and nearly 12 times the amount Bangladesh receives in multilateral international climate financing in absolute terms, according to the latest data.
Bangladesh is one of the poorest countries in the world and is among the most vulnerable to climate change and extreme weather events. The majority of its population, roughly two-thirds, lives in rural areas.
It is unacceptable that the most vulnerable people in the country are shouldering the burden of spending for adapting to climate change. Far too little support is being directed to the communities that are being most affected.
Much more needs to be done to make sure more public climate finance from the government and international community reaches the women, children and men who need it most.
‘Bearing the climate burden: how households in Bangladesh are spending too much’ shows that even though the Bangladesh government’s annual budget for addressing climate change in rural areas increased to US$1.46 billion (123.18 billion taka) in 2018-19 from US$884 million (74.32 billion taka) in 2014-15, it is still less than the amount rural households are spending due to climate change.
Rural households received an estimated total of US$154 million a year in international climate and disaster finance ― or US$6.42 (533 taka) for each rural household per year.
As a result of this disparity, households living in poverty are diverting money away from many of the basic necessities they need to live in order to address the effects of climate change, such as repairing damage to their homes, spending on ruined crops and building defences against damage.
This includes money they need to send their children to school, for healthcare and to put food on the table. As a result, we found that these families are having to turn to informal lenders who charge high interest rates, which is pushing them deeper into poverty. Low-cost loans from formal financial institutions and microfinance NGOs need to be made more widely available.
‘Bearing the climate burden’ also found that female-headed households spend three times more money as a share of their income than households headed by men. This important revelation shows that addressing the impacts of climate change is more of a priority for women, so it is crucial that extra support is directed to female-headed households.
Climate finance is a fundamental building block for tackling the emergency the world is facing. The high costs of climate change that developing countries face are largely as a result of other countries’ actions.
Recognising this in 2010, developed countries meeting in Cancun, Mexico committed to mobilise US$100 billion a year by 2020 to help address developing countries’ needs in tackling climate change. We are now just one year from this key deadline.
It is clear that, not only are governments falling short of this goal, but previous IIED research shows that less than US$1 in US$10 of international climate finance is being directed to the local level.
Plus, 93% of it is not transparent enough to track how it is being used. Because of a lack of transparency, often it is not possible to identify exactly what donor countries are investing their climate finance in. Reporting methods are hard for many to understand and often they are obscure, and the information provided too limited.
As a result, local priorities and the flexibility to respond both to rapidly changing needs and new opportunities are not being met. Changing this and making sure money reaches where it matters most is crucial for developing countries to be able to achieve the Paris Agreement’s targets for keeping temperature rise below 1.5°C above pre-industrial levels. It is vital that more climate finance is directed to the local level and that local people are included in designing programmes to ensure their priorities are met.
On 23 September, leaders from around the world will meet at the United Nations in New York for the Climate Action Summit. This is an opportunity for all governments to raise their commitments to tackle climate change. For the richer countries responsible for the bulk of historic emissions, this must include both meaningful commitments to deliver cuts in emissions, and a renewed determination to deliver support to those who need it most.
This story is part of Covering Climate Now, a global collaboration of more than 250 news outlets to strengthen coverage of the climate story.
(Andrew Norton is Director of the International Institute for Environment and Development (IIED)