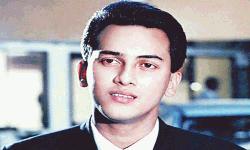 Dhallywood superstar Salman Shah had not been murdered, according to Police Bureau of Investigation (PBI) reports.“He had ‘committed suicide’ following a family feud over the relationship with co-actress Shabnur,” said PBI’s chief Banaj Kumar Majumder at a press briefing held in city’s Dhanmondi on Monday.
Banaj Kumar said, “As per the final report there is no proof of Salman’s murder. We took the depositions of his wife Samira, relatives, friends and colleagues.”
After taking depositions and investigation, it is proved that Salman committed suicide as he could not tolerate his mental agony and also for family feud, the PBI boss said.
PBI found five reasons behind Salman’s suicide are: his excessive intimacy with Shabnur, conjugal conflict with wife Samira, attempt to suicide several times as he was over emotional, limitless love for his mother that turned into huff for his complicated relationship and incompleteness of conjugal life for not having children.
Salman Shah mysteriously died on September 6, 1996. His father Kamaruddin Chowdhury had filed an unnatural death case.
Investigation reports mentioning Salman’s death a case of ‘suicide’ had been been submitted several times. But his mother Nila Chowdhury rejected those every times.
On December 7 of 2016, a court in Dhak has asked the PBI to carry out further investigations into the case.
The case accused 11 persons, including the actor’s wife Samira Haque, producer and businessman Aziz Mohammad Bhai.
The others are Salman’s mother-in-law Latifa Haque Lucy, house help Monowara Begum and seven more – Rizvi Ahmed alias Farhad, choreographer Nazrul Sheikh, ‘David’, Ashraful Haque Don, Rabeya Sultana Rubi, Mostak Wayeed, Abul Hossain Khan, reports UNB.