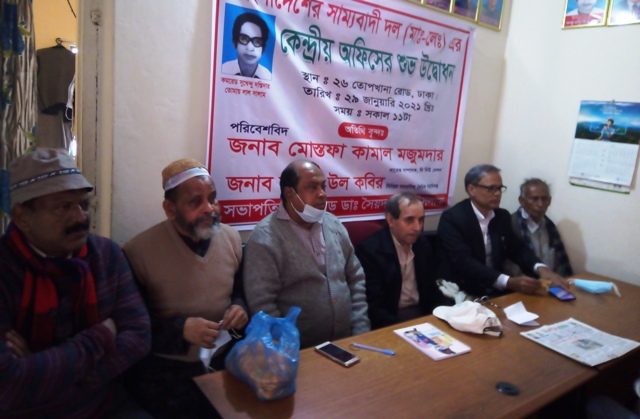 The Bangladesher Samyabadi Dal (ML) on Friday took a fresh vow to contribute to the democratic movement with a view to achieving the rights of working people and turning Bangladesh into a prosperous country. Leaders of the party were speaking at the inauguration of their central office at 26 Topkhana Road. They said that the democratic movement should be strengthened to secure the right to vote, freedom of expression and uproot corruption from the country.
Dr. Syed Nurul Islam, secretary of the party presided over the function where Mostafa Kamal Majumder, Consultant Editor, The Asian Age was the chief guest and Amanullah Shikdar, chairman, Bhashani NAP was the special guest.
Speakers at the function said that all working class people of Bangladesh remained deprived of their rights despite their huge contribution to keep the wheels of the economy running.
Dr. Syed Nurul Islam said Samyabadi Dal will remain with democratic movement to establish the rights of the people. There is a need for movement before election, he said.
Quazi Mostafa Kamal, member of the party politbureau said that the people now cannot cast their votes in elections. Corruption has crossed all limits, he said.
Mostafa Kamal Majumder recalled the glorious catalytic role of left political parties in all democratic movements of Bangladesh and said, in the changed circumstances now they should take lessons from the success of the left movement in Latin America.
Amanullah Shikdar offered to join hands with Samyabadi Dal to set up candidates for Parliamentary elections.
The function was also addressed by Suhas Bhattacharaya, Saiful Islam of Bangladesher Communist Party (ML), Gazi Ruhul Amin, Comrade Mamun, Comrade Ghani, Abdul Huq Bhuiyan and comrade Samrat. – GW News Desk