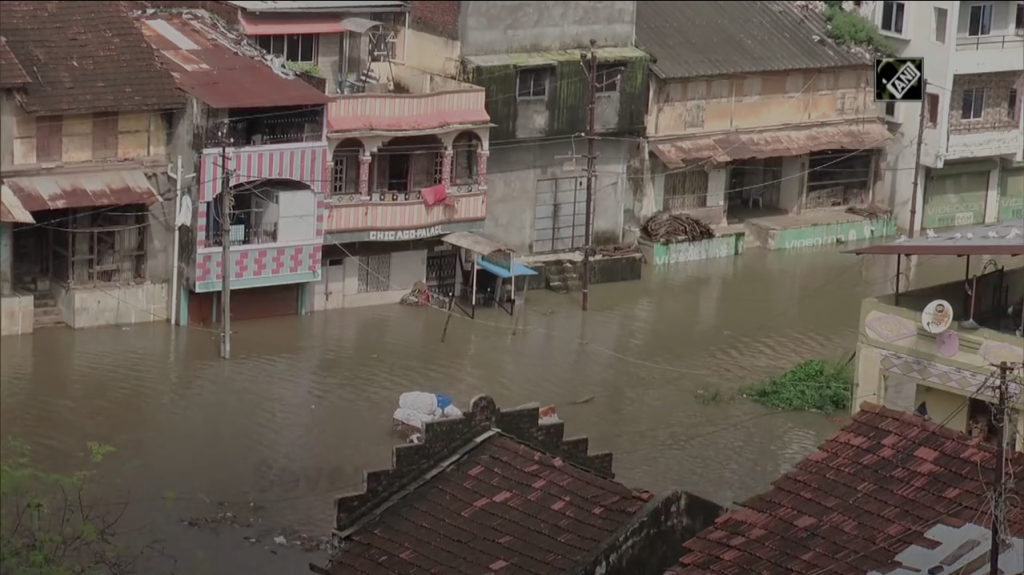 September 2, 2020 SANDRP
Sardar Sarovar Dam (SSD) operators are operating the dam callously, almost cruelly, without consideration of the impact of the operation in the downstream area. Till Saturday-Aug 29, 2020 early, they were not releasing any water from the spillway gates of the dam, in spite of sufficient actionable information at least since Aug 26 that rainfall is hugely increasing in upstream Narmada basin. By Aug 29 night they were releasing up to ten lakh cusecs – Cubic Feet Per Second (28320 cumecs or Cubic Meters per second) of water. Three days later, in the evening of Tuesday, Sept 1, they closed the spillway gates, thus stopping all releases from the spillway. During these 3-4 days, massive quantities were released, up to 30 000 cumecs through spillways, and nothing before or after! It created massive flood disaster all along the downstream from Gaudeshwar to Bharuch, but the Sardar Sarovar Project (SSP) authorities, Gujarat government seem least bothered.
It’s in fact double disaster: it created an avoidable flood disaster. The second disaster was basically in terms of the loss as it also meant that the water that could have been released into the river over longer period, could not be used for that purpose.
Could they have avoided this kind of massive, disastrous flood flow for the downstream area for 3-4 days and instead staggered the releases over longer period, which, in stead of of creating a disaster, could have helped the downstream river and area over a longer period? Was there actionable information available with SSP authorities to take such advance releases of lower quantum? Did they use that information? Who are responsible? What action can and should be taken?
The downstream disaster The releases were so heavy on Aug 29 that TOI reported: “About 21 villages located close to the embankment of Narmada river in Jhagadia, Bharuch and Ankleshwar talukas in Bharuch district have been put on alert… A team of National Disaster Response Force (NDRF) too has been put on stand-by in the district for rescue and relief work following the flood alert issued by the Bharuch district administration on Saturday… District collector of Bharuch, Dr MD Modiya said, “People in low-lying areas in Jhagadia, Bharuch and Ankleshwar have been advised not to venture near the river and stay alert. The administration is fully prepared to meet any eventuality.””
On Monday, ANI reported on Monday, Aug 31, 2020: “10 lakh cusecs of water has been released from the Sardar Sarovar Dam today. It has impacted at least 30 villages near the dam. We have shifted 4977 people who were affected by the flood like situation. MD Modiya, the district magistrate, Bharuch said currently the water level of the Golden Bridge is at 32.68 ft.”
According to another set of Gujarati reports, (following opening of 23 of the 30 spillway gates of SSD), for the 7th time in last 50 years, water level crossed 34 feet and reached 35.17 feet (10.72 m). Livelihoods of tens of thousand is affected, at least 6595 people had to be shifted for safety. Boats were plying in Old Bharuch city streets. Water has entered at least 4000 shops, leading to massive damages. Crops over at least 20 000 ha have been destroyed. Narmadeshwar temple at Garudeshwar got washed away in the floods.
The Video from The Times of India shows how Bharuch areas are flooded.
CWC also tweeted how SSP releases lead to floods in downstream areas: https://twitter.com/CWCOfficial_FF/status/1300786574376996864
How did SSP authorities operated the dam? From the information available from CWC (Central Water Commission) Flood Forecasting, NCA (Narmada Control Authority) daily bulletins and other available information, we can understand how SSD was operated during this episode. There are contradictory informations in some instances between these sources, in which case we have gone by what CWC FF hydrographs as that is more detailed information compared to NCA bulletins, which give only daily average figures.
The NCA bulletin of Aug 28 also reported zero releases from SSD spillways. NCA bulletin of Aug 29 reported (applicable for 0800 hours that day) spillway release of 3231.4 cumecs and when we add the RBPH (River Bed Power House) releases of 1114.6 cumecs, we have a total release to the river of 4346 cumecs, this is possibly the average figure for the 24 hrs ending at 0800 hrs on Aug 29. Similarly releases to the river for Aug 30, Aug 31, Sept 1 and Sept 2 are reported as: 17343 cumecs, 25726 cumecs, 29887 cumecs and 23410 cumecs respectively.
The following SSD hydrograph gives the latest situation starting from Aug 30 to Sept 2.