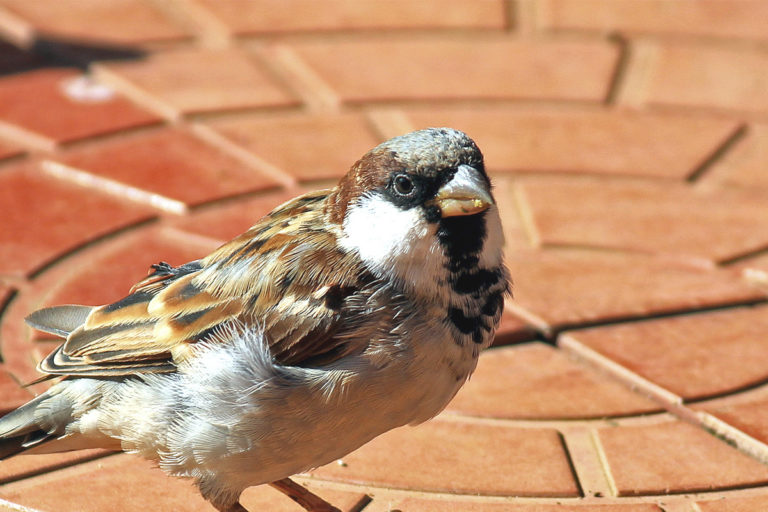 by Nupur Roopa on 25 February 2020• The house sparrow was declared Delhi’s state bird in 2012.
• Though facing multiple threats, the sparrow is categorized as “Least Concern” on the IUCN Red List — a species evaluated as not needing conservation attention.
• Rakesh Khatri’s Eco-Roots Foundation has created about 1,00,000 handmade nests and wooden birdhouses from 100% recyclable material.“Today, if you ask a child about house sparrows, he perhaps would know this bird exists, but probably wouldn’t have seen it,” said environmentalist and documentary filmmaker Rakesh Khatri.
Growing up in the by-lanes of Agra and old Delhi in India, sparrows were an important part of his life. Khatri and his friends would lay bits of wool and rag pieces sprinkled with wheat seeds to provide food for sparrows. Later, these by-lanes and sadly, its birds, became a thing of the past as Khatri moved to Ashok Vihar, another locality in New Delhi.
The population of the house sparrow (Passer domesticus) has declined at an alarming rate in India, especially since the late 1990s. To see a bird that dominated our life and culture disappear is disturbing.
“A healthy population of these birds has disappeared in urban areas because of habitat issues. With the disappearance, their ecological role is gone,” said Sudipto Chatterjee, Associate Professor, The Energy and Resources Institute (TERI) School of Advanced Studies.

“The sparrow’s ecological significance is related to the vegetative cover of an area because it reflects the native and historical vegetative range of the region. This bird needs various native species of vegetation, including numerous wildflowers, shrubs, and trees for sustenance,” explained Vivek Saxena, country representative, IUCN-India.
The reasons for the decline of the sparrow population are loss of habitat due to rapid urbanisation, diminishing ecological resources for sustenance, high levels of pollution and emissions from microwave towers.
“Ventilators in homes have been replaced by ACs and trees by ornamental plants and decorative flower shrubs in parks, making it impossible for the bird to make nests,” explained Khatri.
Another reason is replacement by other avian species. “The threat is the introduction of other avian species like pigeons with greater reproduction rate and a more generalised need for survival. With pigeons being an invasive species to the sparrow landscape, the competition for resources increased, and pushed the sparrows to degraded and ecologically sub-structured regions of their natural habitat,” explained Saxena.
A nest prototype
For Khatri, the sparrow is much more than just a bird. Concerned about their dwindling number, he decided to create artificial nests to help them survive. By studying and researching online manuals, he came up with a prototype of an artificial nest in the year 2003. He tried placing these nests on balconies and roofs throughout his housing complex with the permission of the residents’ association.
Khatri saw many sparrows on the Delhi-Noida highway toll plaza while commuting to the office. One day in 2013, he noticed that people were plastering holes in walls to cover spaces where sparrows made nests. He asked them to stop, stating that he would report their activities to the National Green Tribunal. Fortunately, they agreed and also agreed to permit him to take further measures to conserve sparrows.
“That was the turning point and we installed 100 wooden birdhouses on the toll, and amazingly all birdhouses were adopted by sparrows the very next day”, he explained. The fact that the breeding rate here was 100 percent made him happy.

Khatri set up the Eco-Roots Foundation on 23 March 2012 to raise awareness and launched the ‘Save the House Sparrow Programme’ to carry out his mission of helping sparrows. Over the next two years, the programme spread to 30 other Indian cities, including Raipur, Jaipur, Chandigarh, Bhubaneswar, Jodhpur, Shimla, Lucknow, Amritsar, Chennai and Bangalore.
He is supported in the endeavour by a core team of eight, and about 150 volunteers. The extensive network has been able to reach more than 200,000 students from 1,400 schools. The Foundation also conducts regular workshops for residential welfare associations and corporate companies.
Changing mindsets by teaching nest-building
As part of the programme at schools, Khatri teaches kids to make a nest in just 40 minutes with jute, coconut fibre, bamboo rings, cotton, threads, and a bangle. These nests are specially designed only for sparrows, by keeping a five-finger space between the hole and a stick, making it impossible for other birds to get inside and harm the eggs or hatchlings.
The Foundation has spearheaded the creation of about 100,000 handmade nests and wooden birdhouses from 100% recyclable material through such programmes.
The group has won multiple awards, including the international Green Apple Award for the Nest and Sparrow Conservation in House of Commons London Bird Nest Making Workshops. Eco-Roots has also earned a mention in the Limca Book of Records 2019 for maximum numbers of hand-made nests.
“We found Khatri’s work very beneficial for our Biodiversity and Conservation Programme. At that time, we were looking for the status of sparrows in Delhi and as at the same time the sparrow was declared the state bird of Delhi NCR, Khatri’s work became more meaningful,” shares Chatterjee from TERI.
Khatri trained some of the TERI School of Advanced Studies students pursuing the Forests and Wildlife course to make nests for the university programme Climate Jamboree. This event was meant to engage and empower youth from India and across the world to actively participate for sustainability through innovation and creativity. Climate Jamboree interns trained school students in nest-making during the Jamboree.
“When kids do things hands-on, they get attached to the activity. Here it connected the mission of encouraging observation and curiosity about how the sparrows populate the nests with a strong combination of education and conservation,” he explained.
However, as Chatterjee says, nest building is just a part of the strategy. “Being passionate about a cause is good for awareness, but scientific enquiry is critical to make a change. Declaring the sparrow a state bird is indeed a milestone. However, giving it the respect and attention that a state bird deserves is vital,” he said.
There is no system to conduct a population census for sparrows in India. “The sparrows in India are endangered and still battling to reclaim their niche in their historical habitat range. In the global identification of the status of the species according to IUCN Red List, it is categorised as ‘Least Concern’ (a species evaluated as not being the focus of conservation). The global count of the species is on a decreasing trend, which indicates gradual degradation of the habitat and ecosystem worldwide for the species,” said Saxena from IUCN.
TERI SAS is trying to quantify these threats by researching the limits of emissions and pollution this bird can tolerate. Unless there is a strong scientific component, proper management becomes difficult, said Chatterjee.
“Sporadic activities help in arising curiosity and interest and compassion, but serious thought is required to bring back the population given the present level of threat,” he added.
Scaling up this initiative, raising awareness about rigorous scientific monitoring of sparrows by studying their social behaviour, population status and conservation needs are crucial, he said.
Read more: It takes a village to save the sparrow
There is no concrete action plan for the conservation of sparrows. “The major stakeholders in society need to come together for the cause. Unless the bird is categorized endangered, nothing much can be done as the limited resources are used for conservation of other endangered species,” explained Chatterjee.
Bringing these birds back by providing them space to survive, nest and breed requires care, concern and compassion. Building nests and birdhouses could be the first step.
As Khatri says, “Building at least one nest on every birthday or any celebration will be a worthy gift for mother nature.”
Source: Mongabay India