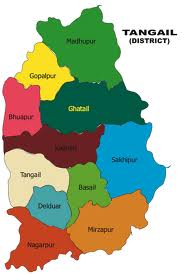 A mobile court sentenced a schoolboy to two years’ imprisonment on
charge of harassing a college girl sexually in Ghatail upazila on
Tuesday.
The convict, Roni, 17, son of Minhaj Uddin, is a resident of Sadhuti
village of the upazila.
Officer-in-charge (OC) Mahbubul Haque of Ghatail Police Station said
Roni, a class X student of a local high school, followed the college
girl, a student of Ghatail Brahmansason Women’s College, from
Kalidaspara area at about 10.00am while she along with her three other
classmates was on way to the college.
When the girl reached in front of the college gate, Roni harassed her
physically before her friends.
Informed by the victim, teachers of the college along with some locals
instantly caught Roni and informed police.
Police handed over him to a mobile court led by executive magistrate M
Kamal Hossain.
M Kamal Hossain, also upazila nirbahi officer of Ghatail, handed down
two years’ jail term to Roni.
(UNB, Tangail)