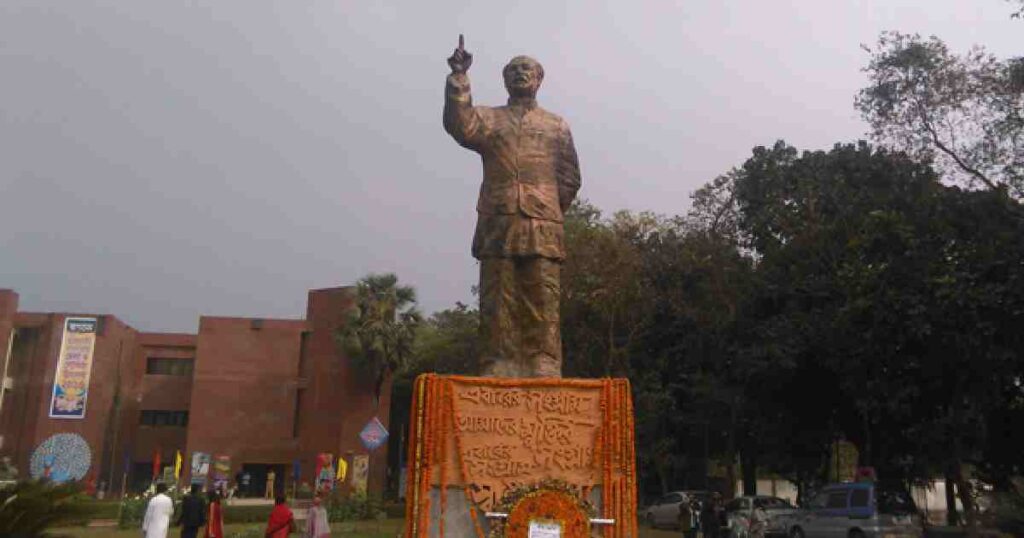 Dhaka, Jan 12 –The Police Headquarters on Tuesday submitted a report to the High Court (HC) stating that proper measures have been taken to ensure the safety of all sculptures and murals of Bangabandhu Sheikh Mujibur Rahman across the country. The report signed by Additional Deputy Inspector General (Confidential) Md Haydar Ali Khan was submitted before a virtual bench of Justice FRM Nazmul Ahasan and Justice Shahed Nuruddin.
Deputy Attorney General ABM Abdullah Al Mahmud Bashar presented the report which said all measures, including installation of CCTV cameras, deployment of detective branch members and regular patrolling by law enforcers, have been taken to ensure safety of Bangabandhu’s sculptures and murals.
Advocate Dr Bashir Ahmed stood for the writ petitioner.
Quoting the report, Deputy Attorney General ABM Abdullah said a total of 220 sculptures and murals of Bangabandhu have been established across the country where members of law enforcement agencies have been deployed for safety.
Earlier on December 7, the High Court asked the authorities concerned to take measures to ensure the security of all sculptures of Bangabandhu Sheikh Mujibur Rahman across the country.
The HC came up with the order on December 6 a writ petition was filed seeking security of all the sculptures, including those of Bangabandhu Sheikh Mujibur Rahman, across the country.
Supreme Court Lawyer Uttam Lahiri filed the writ petition.
The making of Bangabandhu’s sculpture in the capital has stirred up controversies. On December 5, an under-construction sculpture of Bangabandhu was vandalized in Kushtia.
On November 13, Islami Andolan Bangladesh Nayeb-e-Ameer Faizul Karim and Hefazat-e-Islam Bangladesh Joint Secretary General Mamunul Haque opposed the setting up of the sculpture.
Earlier, Awami League General Secretary Obaidul Quader made it clear that any attempt to destroy religious tolerance in the country would be dealt with strictly.
On February 25, the High Court directed the government to declare March 7 as the ‘National Historic Day’ and issue a gazette notification in this regard within a month.
The court also sought the progress report on the matter within a month.
It issued a directive for installing the mural of Father of the Nation Bangabandhu Sheikh Mujibur Rahman in all districts and upazilas of the country within the ‘Mujib Borsho’.
On March 4, 2018, the HC issued another rule asking the government to explain as to why directives should not be given to set up a Bangabandhu’s speech-mode sculpture at the place where he had delivered the historic 7th March Speech in 1971. – UNB