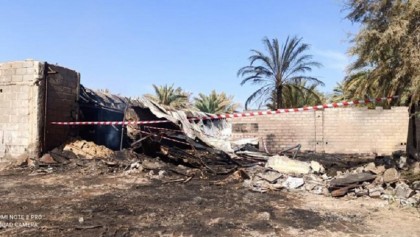 Dhaka, Feb 11 (UNB) : Seven workers, including six Bangladeshis, were killed in a fire that broke out at a sofa factory at Heraj Market adjacent to Al Khalil road of Medina city early Wednesday.
Quoting the local police station, the Bangladesh Embassy in Riyadh provided the identities of five Bangladeshis out six.
They are Mizanur Rahman, son of Sultan Ahmed, M Arafat Hossain Manik, son of Sultan Ahmed, Ishaq Miah, son of Jalal Ahmed, Abdul Aziz, son of Kabir Ahmed and M Rafique Uddin, son of Abu Gafur.
Officials are trying to know the identity of another victim.
The bodies of the victims have been kept at King Fahad Hospital morgue in Medina and efforts are on to get compensation for victims’ families.
Bangladesh Ambassador to Saudi Arabia Dr Mohammad Javed Patwary expressed deep shock at the death of Bangladesh citizens due to fire.
Fire incidents are one of mortality causes for foreign workers in Saudi Arabia.
In April of 2018, at least six Bangladeshis among seven were killed in a fire at a residential building occupied by expatriate workers in Saudi Arabian capital Riyadh.
The fire broke out at the entrance of the building in Al-Tuwaiq neighbourhood which has no other exists. Smoke inhalation is the main cause of the deaths and injuries.
According to a spokesman, 45 out of the 54 expatriate workers living in the two-storey building were inside it during the fire.
In another fire incident in June, 2018, two Bangladeshi workers were killed in a factory fire in Riyadh. The deceased were identified as Kamrul Islam, 38, and Yasin alias Fakir, 39 — both hailing from Comilla’s Chouddagram Upazila.
Before that on May, 2014, eleven people were burnt to death in a factory fire in Saudi Arabia. Nine of them were Bangladeshis.
Oil-rich Saudi Arabia is one of the most popular destinations for Bangladeshis seeking works abroad.
Even when the coronavirus pandemic brought the world to a standstill and battered economies, 161,726 Bangladeshis went to Saudi Arabia for work, according to the Bureau of Manpower, Employment and Training (BMET). The number represents 74.3 percent of the total manpower exported from Bangladesh last year.
Between 1976 and 2019, as many as 4,049,588 (31.39 percent) Bangladeshis went to the kingdom for work, BMET data show.
Saudi Arabia is the biggest source of remittance for Bangladesh. Last year, Bangladeshi workers in Saudi Arabia sent back US$5,128.48 million or 23.58 percent of the total remittance Bangladesh received in 2020.