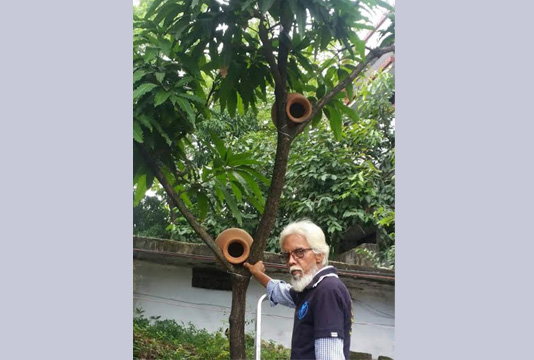 Earthen pitchers on trees are being used as to make safe habitat for native species of birds at different places including ‘Jatisangha Shishu Park’ and ‘Zero Point’ area in the city.Nowadays, the sight of birds returning to nests at nightfall is hardly seen in the city area. The native variety birds are almost on the verge of extinction due to lack of safe habitat.
Khulna AB Culture Bird Breeders Society (KABBS) has taken a special initiative to protect birds’ habitat by hanging earthen pitchers on trees in the ‘Jatisangha Shishu Park’ and other places in the city.
The AB Culture Bird Breeders Society has started the initiatives since March 2018 in the city, said Shabbir Ahmed Munna, President of the KABBS to BSS yesterday.
These initiatives is expected to continue in the city and district and other districts adjacent to Khulna until native birds start finding safe habitats, he said.
Earlier, KABBS hanged around 200 earthen pitchers on mango, mehogoni, shrish, kadom, palash and other trees.
Munna, also the owner of Focus Nursery and Horticulture Farm and ex-general secretary of Khulna Nursery Owners Association said his love for the birds since childhood prompted him to take this initiative.
“Natural productions of our native birds are decreasing due to natural disasters and for netting by hunters and lack of trees. It was very painful to me and I have taken decision to raise numbers of native birds through breeding,” he said.
After taking the initiative to do something for the birds, I started to fulfill my vision along with 32 members under the KABBS banner.
“I am not only thinking about birds’ safe habitat but also on bird’s number breeding through my nursery business,” he said.
The earthen pitchers have been tied with trees by wire so that the birds can find their habitats. Now, the birds have started coming to the trees with earthen pitchers.
Munna, also a bird lover have collected different categories case birds, and has been breeding for a considerable period. He had set a goal for a big number of bird production and to create a favorable environment for birds by creating their safe habitats.
He also said, “Birds are one of the bounties of the nature. If steps are not taken to protect birds, all the varieties of birds will gradually disappear. So we are trying to build birds sanctuary in the city side by side villages. It is still possible to bring back all the birds to safe habitat by working together,” re[ports BSS from KHulna.