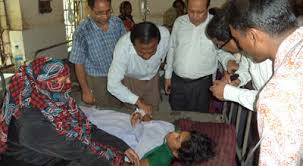 Mehedi Shikdar (19), a student of XII class of Kachu Degree College
under Kachua Upazila in the Bagerhat district was arrested by the
police on the charge of violating a girl student (17) of the same
class and of the same college, recording video of her naked pictures
of the girl and spreading the same through video mobiles, according to
a report received here.
Arrested Mehidi Shikdar is the son of one Mahfuz Shikdar of village
Baktarkathi within Gopalpur Union under Kachua Upazila.
It is alleged that the boy had an affair with the girl who is also an
inhabitant of the same area and with the assurance of marrying her he
committed rape on her, recorded video of her naked pictures and spread
the same with computers.
Being informed of the matter, mother of the victim girl registered a
case with Kachua PS on the night of Wednesday u/s 9 (amended) (1) of
Women and Children Repression Act of 2003 and u/s 8 of Pornography Act
of 2012. Case No. 8 dated 26/6/13.
After filing the case police raided Vasa bazar under Kachua Upazila at
the same night, arrested the alleged rapist from there, seized a
computer from the same bazar and recovered a CD in which naked
pictures of the girl are recorded.
On the following day the police sent the arrested youth to the court
at Bagerhat and sent the victim girl to Bagerhat Sadar Hospital for
her medical examination. -Our Correspondent.