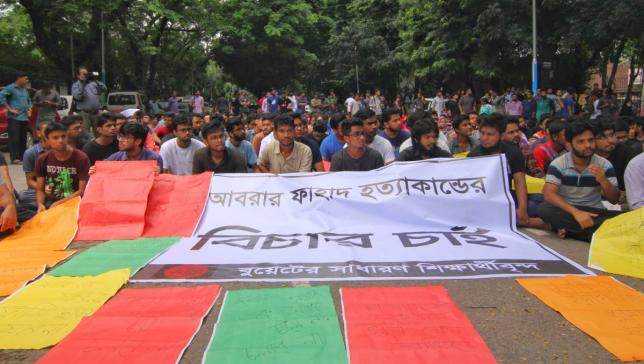 The demand for banning student politics at public universities gained traction after the killing of second-year BUET student Abrar Fahad reportedly by leaders of Bangladesh Chhatra League.But when the university announced a ban on organisational politics earlier this month, almost all student bodies publicly opposed the move.
Chhatra League, with close ties to ruling Awami League, and BNP’s student wing Jatiyatabadi Chhatra Dal were the only politically active student bodies at the premier engineering university. Along with Chhatra League and Chhatra Dal, left-leaning student bodies have demanded a review of Buet’s decision.
They made a case for it, arguing that student leaders played leading roles during key historical events such as the Language Movement, the Liberation War and anti-autocracy movement.
Chhatra League’s Acting President Al-Nahean Khan Joy told UNB that banning politics will never bring any positive result for the students.
He said they had already expelled those found involved in Abrar’s murder.
“You can’t blame the whole organisation for the misdeeds of some people. We’ll talk to the Buet authorities and request them to reconsider their decision,” said Joy.
But Chhatra Dal General Secretary Iqbal Hossain Shamol demanded banning, what he called, “illegal and criminal activities of Chhatra League” at the universities.
“Instead of organisational student politics, the [Buet] authorities should have banned the authoritarian political practices of Chhatra League,” he said.
Left-leaning student organisation Chhatra Union’s President Mahedi Hasan Nobel said the Buet authorities are partly to blame for Abrar’s death and that the university banned student politics to “hide its failure”.
“We never support banning student politics because it may be used to suppress opposing voices,” he said, reports UNB.