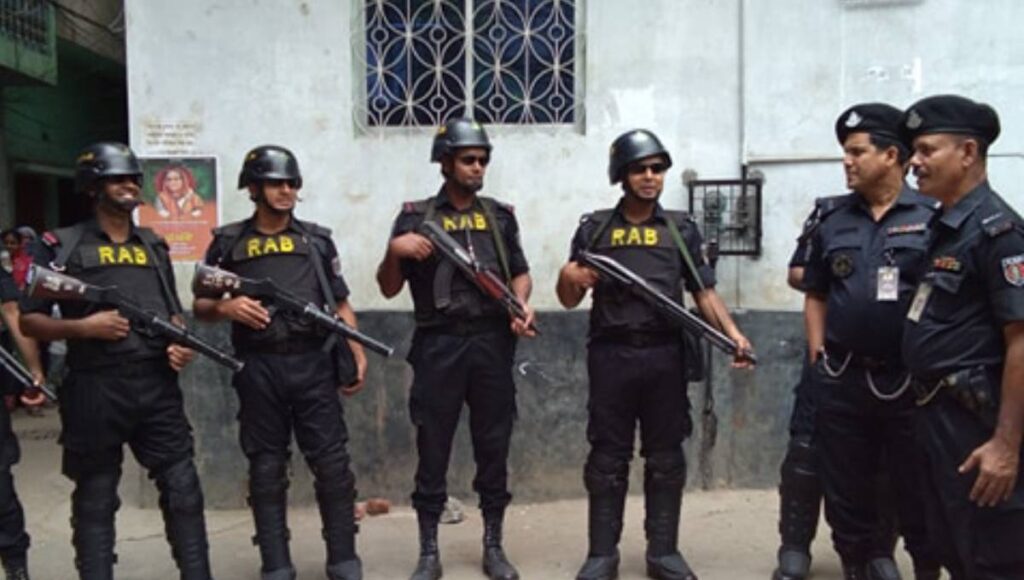 Dhaka, Sept 24 – The Rapid Action Battalion (RAB) on Tuesday recovered more than Tk 50 mln, 730 bhori (nearly 8kg) of gold ornaments and six guns from the residences of Sutrapur Awami League (AL) Vice President Enamul Haque and his two accomplices.However, Enamul and his brother Rupon Haque, joint general secretary of the local AL unit, who are shareholders of Wanderers Club in Fakirapool, could not be detained.
Wanderers club’s shareholder Enamul used to bring the money he received from the club. He built a vault to keep his money in his home in Natun Rasta area of Dayarganj of Murgitola, Baniyanagar.
However, when there was no place to store his money, he used to buy gold ornaments with money.
Enamul had already left the country while Rupon had been absconding, said Lt Colonel Shafi Ullah Bulbul, commanding officer of RAB-3, mentioning that the money was illegally earned from the casino.
The law enforcers seized more than Tk one crore, the gold jewelries, three shotguns and two revolvers from three vaults at the six-storey house of Enamul at Banianagar in old Dhaka’s Sutrapur area.
After that they raided the house of Enamul’s accomplice Abul Kalam alias Kala in Narinda and recovered Tk two crore from a vault there. They also found a revolver beside the vault.
Later, the RAB conducted another drive at the three-storey building of Rashid, another aide of Enamul, in the same area and seized Tk 2 crore from another vault there. Neither Kala nor Rashid were at home during the drive.
Earlier, the Rab force came to know that a good amount of money was siphoned off from the club. Later, from a vault maker they got the information that Enamul had made several vaults.
Based on the information, the law enforcers conducted the drive at Enamul’s residence.
RAB officials had surrounded the building of Enamul since the early hours of morning, RAB 3 Commanding Officer Bulbul said.
He said, they recovered around Tk 1.04 crore and gold ornaments weighing 730 bhori (8kg) from Enamul’s house.
Currently, the price of one bhori gold (22 karat), according to Banglades Jewellers Samity’s website, stands at Tk 56, 662. The price of one bhori gold (21 karat) is Tk 54,500.
He said: “We came to know that they were shareholders of the casino in Wonders Club. They even brought home the dividends they earned from the casino the previous day.”
“We also have information that they bought five shinduks (Vault) from a shop last Saturday,” Bulbul said.
When connected, Dhaka South Awami League General Secretary Shah-e-Alam Murad told Journalists that he was unknown about the issue that Enamul was involved in Casino business.
“We will take organizational action against him. We will tell the unit’s president-secretary to give a show-cause notice to him,” he said.
Locals alleged that using muscle power, Enamul got hold of 15 houses in old Dhaka.
It has been known that Enamul had been a member of the club since 1985. Later, he gradually bought the shares of the club and became one of its owners.
Earlier, the country woke up to this underworld operation during a single crackdown by the Rab on Wednesday.
At least five clubs in Dhaka city were raided on that day and 182 people, including a Jubo League leader Khaled Mahmud Bhuiyan, were arrested. Fakirerpool Young Men’s Club and Dhaka Wanderers Club were sealed off.
On Friday, Jubo League leader GK Shamim was arrested along with illegal firearms and huge money from his Niketan office. RAB members seized fixed deposit receipts (FDRs) worth Tk 1.65 billion, Tk 18 million in cash and huge stash of foreign currencies during the drive.
On the same day, Rab detained five people, including Kalabagan Krira Chakra president Safiqul Alam Firoz, and recovered a pistol and Yaba from the club office.
Mohammedan Sporting Club, Victoria Sporting Club, Arambagh Sporting Club and Dilkusha Sporting Club in Motihjeel area were raided by police on Sunday. – Staff Reporter