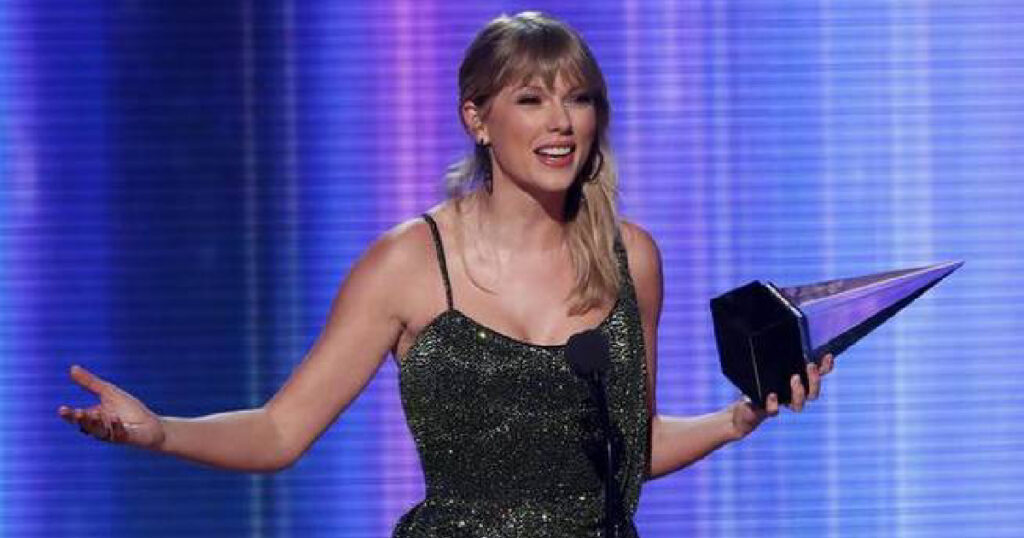 NOVEMBER 25, 2019 – Taylor Swift tied Michael Jackson’s record at the American Music Awards as she collected her 24th win and used her speech to thank her record label for allowing her to freely express herself as an artist.Her remarks Sunday came amid a public battle between Swift and the men who own the master recordings of much of her music.
Swift won favorite pop/rock album for “Lover,” her first release on Universal Music Group’s Republic Records. She released her first six albums on Big Machine Label Group, founded by Scott Borchetta, who owns Swift’s master recordings along with music manager Scooter Braun.
“This album really felt like a new beginning, and I also really love my record label, Universal and Republic. Monte Lipman, Lucian Grange, thank you for being so generous to me and allowing me to make whatever music I want to make,” she said onstage. “As a songwriter it’s so thrilling to me that I get to keep doing that. And I’m so excited I get to perform for you all later.”
That performance Swift was speaking of was put in jeopardy by Borchetta and Braun, she said in a Nov. 15 social media post.
Swift beat out albums by Billie Eilish and Ariana Grande, who is managed by Braun.
Eilish was also a winner, taking home the first televised award of the night — favorite alternative artist.
“You made it all happen, man,” Eilish said as she thanked her fans. “I’m like shaking.”
Selena Gomez kicked off the AMAs as Swift and Halsey got out of their seats to cheer their pal on.
Gomez, sounding pitchy at times, performed her No. 1 hit “Lose You to Love Me,” and stripped down from her dress to a shiny bodysuit to finish the performance with the upbeat song “Look at Her Now,” as audience members, including country singer Kelsea Ballerini, sang along.
R&B singer Ciara, who is hosting the show airing live on ABC from the Microsoft Theater in Los Angeles, performed after Gomez.
Swift, who is nominated for five awards, has a chance of surpassing the King of Pop’s record. Swift will also receive the artist of the decade award, to be presented by Carole King, at the show. She is also nominated for the top prize — artist of the year — along with Grande, Drake, Halsey and Post Malone, who is the leader with seven nominations.
Other performers include Shania Twain, Green Day, Jonas Brothers, Dua Lipa and Christina Aguilera and A Great Big World.
Malone, who will perform with Travis Scott and Ozzy Osbourne, is nominated for favorite male pop/rock artist, favorite rap/hip-hop artist, favorite rap/hip-hop album for “Hollywood’s Bleeding” and favorite rap/hip-hop song for “Wow.” His massive hit with Swae Lee, “Sunflower” from the Oscar-winning animated film “Spider-Man: Into the Spider-Verse,” is up for favorite pop/rock song and collaboration of the year.
Lizzo, Eilish and Lil Nas X — who also scored six Grammy nominations — are up for new artist of the year along with Ella Mai and Luke Combs. – UNB