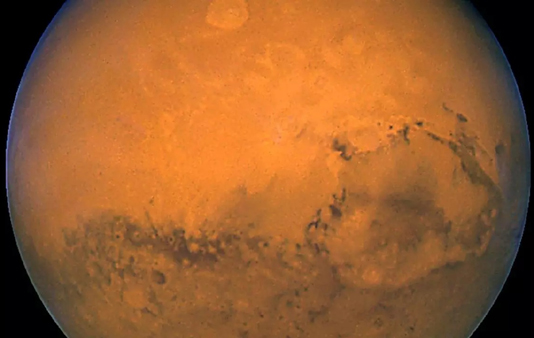 Mars may now be considered a barren, icy desert but did Earth’s nearest neighbour once harbour life?
It is a question that has preoccupied scientists for centuries and fired up sci-fi imaginings.Now three space exploration projects are gearing up to launch some of the most ambitious bids yet to find an answer.
Scientists believe that four billion years ago the two planets both had the potential to nurture life — but much of Mars’ intervening history is an enigma.
The new Mars probes from the United States, United Arab Emirates and China will launch this summer.
Their goal is not to find Martian life — scientists believe nothing would survive there now — but to search for possible traces of past lifeforms.
These vast and costly programmes could prove futile. But astrobiologists say the red planet is still our best hope for finding a record of life on other planets.
Mars is “the only planet with concrete chances of finding traces of extraterrestrial life because we know that billions of years ago it was inhabitable,” said Jean-Yves Le Gall, president of French space agency CNES in a conference call with journalists this week.
Le Gall is one of the architects of NASA’s Mars 2020 exploratory probe, which is scheduled for launch at the end of July when Earth and Mars will be the closest for more than two years.
The more than $2.5 billion project is the latest — and most technologically advanced — attempt to uncover Mars’ deep buried secrets.
But it is not alone, as enthusiasm for space exploration has reignited.
– ‘News from Mars’ –
Scientific enquiry of the red planet began in earnest in the 17th Century.
In 1609 Italian Galileo Galilei observed Mars with a primitive telescope and in doing so became the first person to use the new technology for astronomical purposes.
Fifty years later Dutch astronomer Christiaan Huygens used a more advanced telescope of his own design to make the first ever topographical drawing of the planet.
Mars — compared to the “desolate, empty” moon — has long seemed promising for potential inhabitability by microorganisms, wrote astrophysicist Francis Rocard in his recent essay “Latest News from Mars”.
But the 20th century presented setbacks.
In the 1960s, as the race to put a man on the moon was accelerating towards its dazzling “Giant Leap”, Dian Hitchcock and James Lovelock were putting a dampener on hopes of finding life on Mars.
Their research analysed the planet’s atmosphere looking for a chemical imbalance, gases reacting with each other, which would hint at life.
“If there is no reaction, then there is probably no life there,” Lovelock told AFP.
“And that was the case — Mars has an atmosphere that is completely inactive as far as chemistry is concerned.”
Their conclusion was confirmed a decade later, when the Viking landers took atmospheric and soil samples that showed the planet was no longer inhabitable.
This discovery was a “real tanker” for Mars research, Rocard told AFP.
Mars programmes essentially paused for 20 years.
Then in 2000 scientists made a game-changing discovery: they found that water had once flowed over its surface.
– Follow the water –
This tantalising finding helped rekindle the latent interest in Mars exploration.
Scientists pored over images of gullies, ravines, scouring the Martian surface for evidence of liquid water.
More than 10 years later, in 2011, they definitively found it.
The “follow the water, follow the carbon, follow the light” strategy has paid off, Rocard said.
Every mission since the discovery of water has brought “more and more evidence to light that Mars is not quite as dead as we thought,” Michel Viso, an astrobiologist at CNES, told AFP.
The latest US rover to make the journey — aptly named Perseverance — is scheduled to touch down in February of next year after a six-month journey from launch time.
The probe is perhaps the most highly-awaited yet. Its landing spot, the Jezero Crater, may have once been a wide, 45-kilometre river delta.
Rich in sedimentary rocks, such as clay and carbonates — the same types of rocks that hold fossil traces on Earth — Jezero could be a treasure trove.
Or perhaps not.
“We know that water once flowed, but the question remains: for how long?” asked Rocard. “We don’t even know how long it took for life to appear on Earth.”
If the mission can bring these rocks back to Earth they might yield answers to the questions that have long confounded scientists.
But they will have to wait at least 10 years for the analysis to be available.
Viso said the results will likely be “a bundle of clues” rather than a clear answer.
– In the beginning –
Scientists are also considering perhaps an even more profound question.
If life never existed on Mars, then why not?
The answer to this could enrich our understanding of how life developed on our own planet, Jorge Vago, the spokesperson of the European Space Agency said.
Due to shifting plate tectonics below the Earth’s core, it is exceedingly difficult to find any traces of life here before 3.5 billion years ago.
Mars has no tectonic plates and so there is a chance that four-billion-year-old signs of life that “one could never find on Earth” may be preserved there, Vago said.
And if the latest Mars programmes fail to find signs of ancient Martian life, there are always further frontiers to explore.
Encelade and Europe, two of Saturn’s and Jupiter’s moons, respectively are considered promising contenders.
Although reaching them remains more science fiction than reality, reports AFP, Paris.