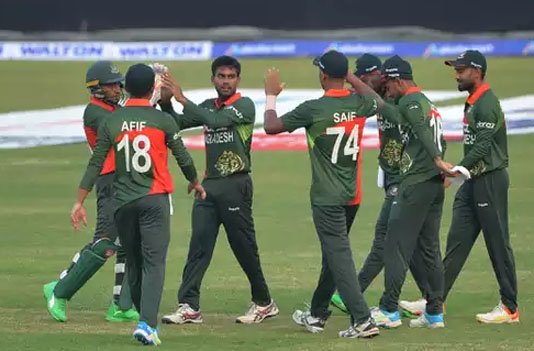 DHAKA—Emboldened by the victory in the first match, Bangladesh eyes to clinch the three-match ODI series against Sri Lanka with a game to spare as they take on Island nation in the second game tomorrow (Tuesday) at the Sher-e-Bangla National Cricket Stadium.

The match starts at 1 pm and will be aired live on Gazi TV and T Sports.

Heavy rain and thunderstorms are in tomorrow’s weather forecast but Bangladesh would like to get some match time to clinch the series.

The Tigers won the first game by 33 runs, surviving a Wanindu Hasaranga scare, who blasted 60 ball-74. It was a spot of bother for the hosts alongside many others despite winning the first game.

While Tamim urged the other players to come all guns blazing, the likes of Liton Das, Mohammad Mithun failed miserably. But still the batting was not entirely Okay as Mushfiqur Rahim perished to an injudicious reverse-sweep shot. Mahmudullah and Tamim also were caught in double mind to lose their wicket. Whereas one of them should score a century, according to Tamim.

The fielding and bowling were also not hundred percent up to mark and it allowed Hasaranga to give Bangladesh a scare. Such was his impact that if he was not tried due to the unforgiving condition, he could have won the game for the side single-handedly.

“We know that the job is not done. There’s two more games to go [in the series]. We hope to put on a better show,” Tamim Iqbal said.

Bangladesh went into the first ODI, having lost nine of 10 matches across three formats with one draw. Naturally Tamim was happy to snap the winless streak but at the same time, he hoped his side would correct the mistakes that they had in the first ODI and won the series with a game to spare.

“Happy with the way we fought. Mushfiqur, Mahmudullah were superb. Young Afif batted superbly. We did a decent job scoring 250 because it was two-paced. Definitely good to get back to winning ways. Losing is no fun, we lost 10 games across formats in a row. Winning is happiness. Still got two games, hope to continue this,” he added.

While Bangladesh aims to clinch the series, Sri Lanka is looking to keep it alive. Their captain Kusal Perera said they would leave no stone unturned to level the series.

“Not good to end on the losing side, but there are a lot of positives. Wanindu was superb. We bowled well. Bangladesh are a good side, our bowlers aren’t experienced but they did well to restrict them to 257,” he said.

“The top-order batsmen need to bat at least 30-35 overs. Isuru and Wanindu gave us a chance (in the first game), but credit to their bowlers. We have two games and we have to come back strongly.”

If the stat is taken into consideration, Sri Lanka still has the upper-hand over Bangladesh, winning 39 of the 49 matches the two teams played in this format. Bangladesh won just eight matches, including the last game and the rest of the two matches fetched no result. Most of Bangladesh’s eight wins came after they became forced to be reckoned with in this format.BSS