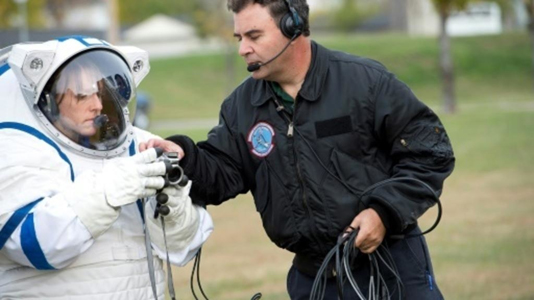 Space engineer Pablo de Leon has designed two spacesuit prototypes for the Moon and for Mars, and knows how long development takes.
If NASA wants to meet its own deadline of returning to the Moon by 2024, it needs to get a move on.
“NASA still doesn’t have a suit because the decision was taken suddenly,” explained the Argentine engineer, who is the director of a lab at the
University of North Dakota financed by NASA and dedicated to crewed space flight.
“On the one hand, there’s this order to get to the Moon by 2024, and on the other, we haven’t developed new spacesuits since 1977,” de Leon told AFP
during a recent visit to the Kennedy Space Center in Florida. The suits currently worn by American astronauts on the International Space Station — which aren’t suitable for surface exploration — were designed in the 1970s, and patched up since. Only a few remain in working condition.
For the time being, NASA is focused on the development of the rocket,capsule and lander to take astronauts to the lunar surface. The suit will come later.
But for de Leon, NASA’s current overall budget of around $21 billion a year isn’t enough to meet the deadline of 2024, calling it “too optimistic.”
De Leon and his teams have developed the NDX-1 suit for Mars and NDX-2 forthe Moon.
A spacesuit is “a machine as complex as a spacecraft” because it needs to regulate temperature, pressure and humidity. It also protects astronauts against radiation and holds communications systems.
“All this in a piece of clothing,” he said.
Two kinds are needed: one for floating in space, for example, when repairs are needed to the ship’s exterior; the other for setting foot on alien worlds, which is de Leon’s specialty.
When an astronaut is weightless, the suit is rigid below the waist as one’s legs serve almost no purpose.
But on the surface of the Moon or Mars, astronauts need to walk, and their suits need to be light and flexible enough for them to move forward, backward, jump, bend, and handle tools.
Another serious issue is lunar dust.
The Apollo astronauts learned 50 years ago that it is extremely abrasive, penetrating the upper layers of their suits and cutting like glass. “In three days those suits would have been torn apart,” said de Leon.
The longest Apollo mission lasted for 75 hours on the Moon, but the astronauts didn’t spend all their time outside the lunar module.
Here on Earth, erosion “has over millions and millions of years worn down stones, sand, dust,” said de Leon.
But on the Moon, there are no weather systems and no erosion: “The pebbles,to the smallest particles, are very sharp, they cut like a saw.”
As for Mars, which the US plans to reach in the 2030s, the soil contains perchlorate, a chemical which is toxic to humans.
“It will be necessary to isolate everything that has been in contact with the outside as soon as the astronauts remove their suits.”
Habitats on Mars will need to be designed to carry out decontamination.
For now, de Leon and other specialists across the US await news from NASA,which hasn’t yet awarded a contract, and has no deadlines for doing so, reports AFP.