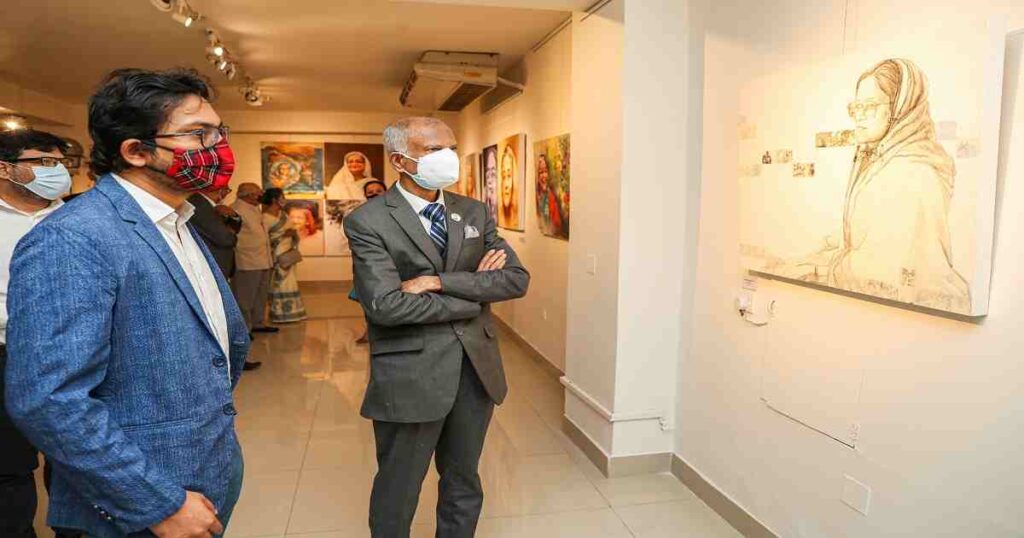 Dhaka, Feb 16 (UNB): The two-month-long art exhibition, hosted by Gallery Cosmos, on Prime Minister Sheikh Hasina concluded on Tuesday, with rich tributes to Father of the Nation Bangabandhu Sheikh Mujibur Rahman.
The group art exhibition titled “Sheikh Hasina: On the Right Side of History” painted an elaborate picture of her journey from a cheerful teenager to a mother figure to millions of Bangladeshis who inspires to strive towards a brighter future emerging out of the ethos of darkness.
On the concluding day of the exhibition, former Dhaka University Vice-Chancellor Prof AAMS Arefin Siddique said the artists nicely depicted Sheikh Hasina’s expressions, gestures and postures to show how Bangabandhu’s daughter overcame various obstacles and challenges in her long political career.
“Sheikh Hasina has long been preforming the responsibilities as Awami League President, and as either the opposition leader or the Prime Minister, braving various obstacles and challenges, including August 21 grenade attack and some other attacks on her at different times. Every artwork here has nicely captured her expressions, gestures and postures of that difficult times,” he said.
Prof Arefin, also the Chairman of the Board of Directors of Bangladesh Sangbad Sangstha (BSS), made the remarks while addressing the concluding ceremony of the group art exhibition at Cosmos Centre in the city.
Gallery Cosmos, in collaboration with the Cosmos Atelier71, hosted an art camp last year supported by the Cosmos Foundation on Prime Minister Sheikh Hasina, the eldest daughter of Bangabandhu. The artworks produced at the camp were showcased at the exhibition.
Stating that Sheikh Hasina is a lively and amicable person, Dr Arefin said the Prime Minister talks to people giving them an impression that she is their relatives, not the Prime Minister. “But again when she takes any important decision of the state she shows her prudence, strong attitude and strong morale being imbued with patriotism and overcomes all barriers.”
He said the Prime Minister tackled all the adversities regarding the construction of the Padma Bridge with her able and visionary leadership, immense courage and strong mentality. “Sheikh Hasina’s these personal traits have been reflected in the art exhibition.”
The former DU VC also lauded the role of the Prime Minister in tackling the coronavirus pandemic and taking the country forward by uniting people. “Even, many developed countries still couldn’t ensure a vaccine for their citizens. But the people of a developing country like Bangladesh are getting vaccine here only for the outstanding leadership quality of Sheikh Hasina.”
Stating February is the month of the historic Language Movement of the nation, he paid homage to all the martyrs of the Language Movement.
Dr Arefin also showed deep respect to the memory of the Father of the Nation and Bangabandhu Sheikh Mujibur Rahman on the occasion of his birth centenary.
He thanked Cosmos Group’s Managing Director Enayetullah Khan and the members of Gallery Cosmos for taking the initiative for the exhibition with 21 unique art works.
Speaking at the programme, former Ambassador Tariq A Karim greeted the artists as he said they have been able to rightly capture Sheikh Hasina’s mood and expression. “I saw a picture where the artist very nicely presented her (Hasina’s) sense of wonder and eye expression and her thoughts.”
“I look at her with amazement as how she raised herself out of her grief after the tragedy on August 15, 1975. She skilled herself and embraced the vision of her father and dynamism. The artists rightly captured these traits and expressions,” said Ambassador Tariq Ahmad Karim, currently Director of the Centre for Bay of Bengal Studies at the Independent University, Bangladesh.
Kate Jaro Khan, Cosmos Group Head of Human Resources, said the exhibition is part of the year-long programme to celebrate the birth centenary of Father of the Nation Bangabandhu Sheikh Mujibur Rahman.
“Cosmos is proud to arrange this exhibition on the daughter of the Father of the nation who has just not showed us future but also an inspiration for every young girl, boy, man and woman to keep going and going till the last day of life,” she said.
Earlier, Kate welcomed the guests and briefed them about the exhibition.
Former Ambassador Tariq A Karim’s wife Naghma Karim and WildTeam CEO Md Anwarul Islam were, among others, present.
On December 15, Information Minister Dr Hasan Mahmud formally inaugurated the group art exhibition.
Later, US Ambassador to Bangladesh Earl R. Miller, British High Commissioner to Bangladesh Robert Chatterton Dickson, Indian High Commissioner to Bangladesh Vikram K Doraiswami, Turkish Ambassador to Bangladesh Mustafa Osman Turan, Iranian Ambassador to Bangladesh Mohammad Reza Nafar, Vietnamese Ambassador to Bangladesh Pham Viet Chien, Pakistan High Commissioner to Bangladesh Imran Ahmed Siddiqui and Brazilian Ambassador to Bangladesh Joao Tabajara de Oliveira Junior visited the art exhibition.
Artists Alakesh Ghosh, Ahmed Shamshuddoha, Sheikh Afzal, Nasir Ali Mamun, Bishwajit Goswami, Ratneshwar Shutradhar, Rasel Kanti, Monjur Rashid, Sourav Chowdhury, Maneek Bonik, Jayanta Sarkar, Azmol Hossain, Fida Hossain, Amit Nandi, Didarul Limon, Tamanna Afroz, Fahim Chowdhury, Miskatul Abir, Proshun Halder, Hasura Akter Rumky and Surovi Akter had participated in the camp.