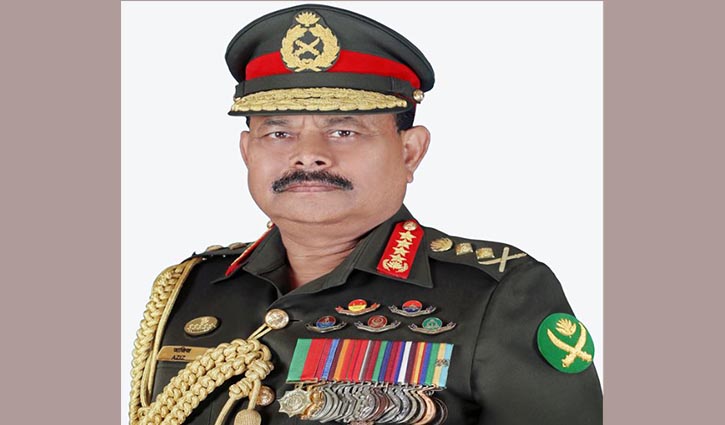 Dhaka, Feb 16 (UNB) : Bangladesh Army Chief General Aziz Ahmed on Tuesday said the recent report of AL Jazeera is completely ill-motivated.
“When I visited my bother in Malaysia he was no longer an accused in any case, and he was earlier acquitted from a conspiracy case. He got acquittal in March and I met him in April. The AL Jazeera report is fully ill-intended,” he said.
The Army chief came up with the remark while talking to reporters after a programme of Army Aviation Group in the city’s Tejgaon area on Tuesday.
Replying to a question from a reporter, he said the Prime Minister of the Bangladesh government appointed the Chief of Army Staff and if anyone tries to demean the army chief it is tantamount to demeaning the Prime Minister.
The army chief said he is fully aware so that his institution or the government does not feel embarrassed or face any controversy because of him.
“I’m sure you’re well informed about the ill attempt. They’re spreading propaganda about an institution like Bangladesh Army for which is the country as well as the nation take pride,” said the army chief.
Gen Aziz went on saying, “I would like to say it clearly that Bangladesh Army is a well-trained and well-motivated force, much more organised than before, and the chain of command is very much effective. Each member of the army rejected such ill efforts with abhorrence in the past and is doing so now. We who’re in the chain of command are alert about it.”
“I want to assure you that such propaganda won’t even cast a little bit effect on its chain of command. Bangladesh Army is respectful to the constitution of Bangladesh, committed to upholding the constitution and loyal to the government and ready to follow any order of the government,” he said.
He also said his family will soon hold a press conference about the propaganda about his brothers.
Replying to question about taking this photograph during foreign tours, he said they might have done those by using cut-pieces and adding some different things but their intention will not be fulfilled.
Qatar-based Al Jazeera broadcast the report on February 1.
In a statement, the Foreign Ministry termed “All the Prime Minister’s Men” a “false, defamatory and a politically-motivated smear campaign”.
Bangladesh Army Headquarters also strongly denounced the report, saying it is part of a move to break the harmony among different government organs.
Foreign Minister AK Abdul Momen said Bangladesh was preparing to sue Al Jazeera over airing the report with inaccurate information.