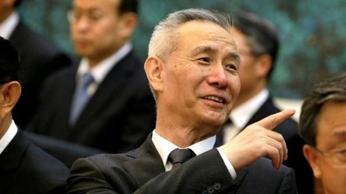 Harvard-educated Liu He has been named one of China’s four vice-premiers – in charge of economic policies and financial issues. It’s a huge and high-profile job.
Known affectionately by some as “Uncle He”, it’s widely rumoured Liu He has been friends with President Xi Jinping since they were teenagers.
Whether that’s true or not, his status today as President Xi’s top economic adviser is beyond dispute.

He has been called the brains behind China’s shift in economic policy, which has seen a focus on slower but more sustainable consumption-based growth, rather than the debt-fuelled investment and exports that have driven the country’s expansion of the past four decades.
How dedicated he is to sticking to this goal, while cutting debt and opening up financial markets, is going to be closely watched by China’s global trading partners.
Mr Liu’s background is textbook Chinese bureaucrat.
Joining the Communist Party aged 24, he worked in academia in China, spending time in government departments before studying in the US – first as a visiting scholar at Seton Hall University, New Jersey in 1992, then at Harvard University, where he achieved a Masters in public administration.
From there, he went on to hold several senior positions within China’s government, including the top planning agency – now the National Development and Reform Commission (NDRC) – and the State Information Centre.
He was made director of the Office of the Central Leading Group for Financial and Economic Affairs as well as deputy director at the NDRC in 2013.
Politically, Liu He’s rise was confirmed last October when he became one of the 25 members of China’s Politburo – the second-most powerful body in the country.
But publically, it was at this year’s World Economic Forum in Davos where his profile on the global stage soared.
Presenting China’s keynote address, in a role performed a year earlier by President Xi himself, his speech reiterated China’s commitment to economic globalisation and its efforts to promote global growth.
But his focus was on China’s three critical battles: continuing efforts to resolve major risks in the economy; an unprecedented campaign against poverty; and a continued fight to reduce pollution.
“As we all know, if a bucket is to hold more water, its shortest plank must be made longer,” he said.
“Likewise, for China to build a moderately prosperous society in all respects, we must fix the shortest plank in our development through winning these battles.”
Then last month, Mr Liu was sent to Washington to meet senior government officials and business leaders, and to restart trade talks between the US and China.
His plane had barely touched down when President Donald Trump’s already-tough stance on cross-border trade was ratcheted up a notch, with the announcement that steel imports would face a 25% tariff, and aluminium would be subject to 10% duties.
It was a policy that would affect China’s imports into the US and so Beijing responded by saying it would not sit idly by if the tariffs hurt its economy.
The exchange could have cast a very dark shadow over Mr Liu’s visit.
But instead, the US and China have agreed to further trade talks.
And Mr Liu seems to have made an impression, with murmurings among US counterparts that he was not only an advocate for continuing economic reform – but someone they could work with.
Which given his prominence and influence is only going to increase, is probably just as well.-BBC