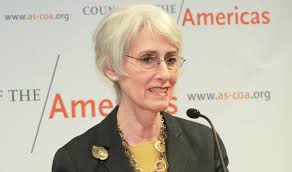 Visiting US Under Secretary for Political Affairs Wendy R Sherman on Sunday said violence is never acceptable in democracy, and hoped the next general election will be free, fair, inclusive and credible one.“We’re very glad that Bangladesh is a very vibrant democracy. We hope the upcoming election, and we’re sure, there’ll be free, fair, inclusive and credible (one),” she told reporters at the Foreign Ministry after a lengthy meeting with Foreign Minister Dr Dipu Moni.
Sherman said the US believes in a democracy, people have a right to voice their concerns, to demonstrate, to march. “But violence… violence is never acceptable as a means to democratic norms.”
Asked whether she had discussions on Ticfa and GSP issues, Sherman apparently parried the question saying, “The government is moving very quickly to address all of the concerns (business and labour fronts).”
She said the US wants to support Bangladesh in every possible way to address any underlined issues.
The US Under Secretary also said she will be meeting in a roundtable tomorrow on all of the issues.
She said the comprehensive Partnership Dialogue between Bangladesh and the USA is addressing four ranges of economic development leaderships that Bangladesh is providing to its counterparts.
On discussion with Dipu Moni, Sherman said, “I had a wonderful discussion with the Foreign Minister. We covered the Partnership Dialogue which is comprehensive, deep and broad set of bilateral discussions on bilateral matters, regional matters and global matters.”
She said the US sees Bangladesh as a country that is on move with economic growth, a leader here regionally and a leader more and more globally.
Sherman mentioned the meeting between Dipu Moni and US Secretary of State John Kerry that held in Washington a few days back and informed that Kerry will hopefully be visiting Bangladesh soon. “I’m delighted to be here before he (Kerry) comes.”
During the meeting with Dipu Moni, she said they had talked about major economic development needs of Bangladesh.
She expressed her deepest condolences over the Rana Plaza and Tazreen Fashions incidents and mentioned that every single of them were in agony.
This is the second visit of Sherman to Bangladesh and she arrived here today to attend the Partnership Dialogue between the two countries.
Sherman, who is leading US delegation here, will meet Prime Minister Sheikh Hasina and leader of the opposition Khaleda Zia during her stay here.
The Partnership Dialogue is the premier forum for further expanding and deepening bilateral cooperation on a wide range of bilateral and regional issues, including development, civil society and governance; trade and investment; security and countering violent extremism; science and technology; women’s empowerment and gender equality.
The Under Secretary will also lead a roundtable with labour, industry, and government officials to discuss standards in the garment sector in the aftermath of the Rana Plaza tragedy.
SOurce: UNB Connect