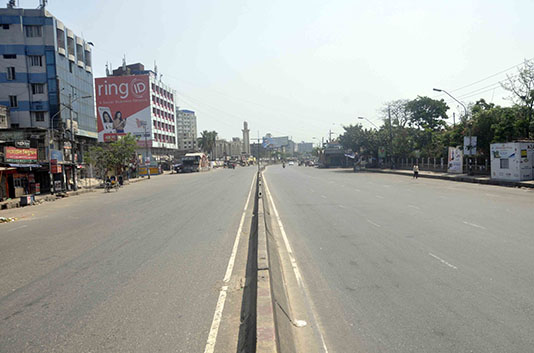 Despite being one of world’s most densely populated city, widely known for its notorious traffic congestions, Dhaka wore a deserted look as the COVID-19 enforced a virtual curfew prompting people to stay indoors.Army troops, called out three days ago in aide to civil power, were seen patrolling the capital streets alongside police to enforce social distancing as part of campaign against the spread of the disease.
Witnesses and residents said the troops alongside the law enforcement agencies were also overseeing if those who recently returned from abroad were staying properly in quarantine at their home.
“The army troops as well as RAB and police personnel came to our apartment building and enquired if I along with my family members stayed inside our flat,” said a journalist who returned from India through Beanpole Land Port on March 21.
He said one police officer called him up from downstairs and “asked me to take the trouble of staying indoors along with my family for the required 14-day and requested the apartment owner to address our family’s daily needs from outside”.
Suspension of all modes of public transport services emptied the usual crowds in Dhaka’s busiest spots like Kamalapur Railway Station, Sadarghat Launch Terminal and inter-district bus terminals.
Few people were seen at kitchen markets, food shops, pharmacies, hospitals as these emergency and essential facilities were kept beyond the 10-day nationwide holiday and mandatory shutdown of offices and businesses.
But witnesses said the law enforcement agencies were forced to intervene in some areas where people were seen crowding in neighbourhood gatherings.
Healthcare officials said no new case of COVID-19 was detected overnight as they tested 42 suspects in the past 24 hours and rather four infected patients returned home getting well during the period increasing the number of recovery cases to 15.
According to the IEDCR, the virus so far claimed five lives in the country and infected 48 against a global tally of 23,335 deaths and around 509,164 cases of infections.
The virus even did not spare the UK’s Buckingham Palace as it kept marks of its wrath on high profile people including heads of governments and states across the globe.
Prime Minister Sheikh Hasina on Wednesday last called the anti-COVID-19 campaign a “war” assuring her government’s preparedness to tackle any “tough situation” in view of the global pandemic.
In a nationwide address, the premier said this “war” demanded people to stay indoors as it was the main means to win it.
“Your awareness will keep you, your family and the people of the country protected,” she said, reports internet.