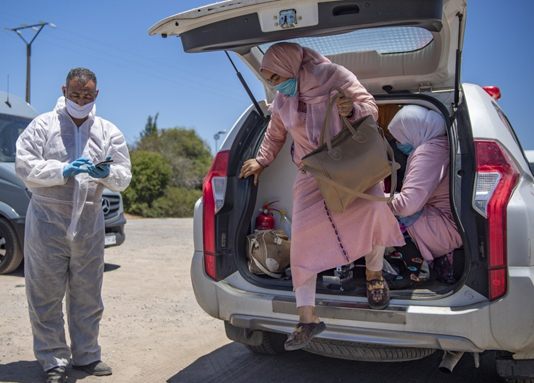 Global coronavirus infections topped nine million on Monday as the World Health Organization warned that the pandemic was accelerating and Saudi Arabia said it would allow a “very limited” number of pilgrims to the hajj next month.France took its biggest step yet back to normality by allowing millions of children to return to school.
But despite Europe further easing lockdowns, cases are still rising around the world, especially in Latin America with Brazil now registering more than 50,000 deaths.
And there are fears of new clusters in Melbourne and Lisbon as well as renewed outbreaks in Beijing and other parts of Asia.
“The pandemic is still accelerating,” WHO’s director general Tedros Adhanom Ghebreyesus told a virtual health forum organised by Dubai in the United Arab Emirates.
Tedros said the greatest threat facing the world was not the virus itself, which has now killed over 465,000 people and infected nine million, but “the lack of global solidarity and global leadership.”
“We cannot defeat this pandemic with a divided world,” he said. “The politicisation of the pandemic has exacerbated it.”
Brazilian President Jair Bolsonaro has repeatedly played down the threat, comparing the virus to a “little flu” and arguing the economic impact of shutdowns is worse than the virus itself.
Brazil is the second worst-affected country behind the United States, where the number of deaths topped 120,000 on Monday and political infighting has prevented a unified policy.
Mexico, Peru and Chile are also coping with severe crises — Mexico City being forced to delay plans for a broad reopening of the economy as the country’s death toll raced past 20,000.
With a vaccine still far away, the WHO has called for a rapid increase in production of the steroid dexamethasone, which has been shown to have life-saving potential for critically ill patients.
– ‘Very limited’ hajj –
Saudi Arabia announced it would allow a “very limited” number of pilgrims to its annual hajj ritual, which last year drew 2.5 million pilgrims from around the world.
The hajj, one of the five pillars of Islam and a must for able-bodied Muslims at least once in their lifetime, represents a potentially major source of contagion.
The authorities on Monday said a hajj only involving pilgrims already in the kingdom would be permitted.
In Europe, countries continued to ease their lockdown restrictions.
Thousands of French danced and partied well into Monday for an annual music festival, in the first big blowout since the lockdown.
Revellers packed the streets of Paris, most shunning masks and social distancing, to enjoy concerts in cafes and on street corners.
Although there were none of the usual extravaganzas, many felt the authorities were too lax.
“This is not what a gradual end to the lockdown looks like,” said Dr Gilbert Deray.
“I understand that the Festival of Music is something of a liberation, but did we really have to have it this year?”
Swimming pools and cinemas also reopened on Monday while children up to the age of 15 returned to school, attendance once again becoming compulsory.
But illustrating the persisting risks, Portugal Prime Minister Antonio Costa said restrictions on gatherings of more than 10 people would be reimposed and cafes and shops ordered to close at 8:00 pm in Lisbon.
Australians were warned on Monday to avoid travelling to Melbourne, as the second-biggest city tightened restrictions over fears of an upsurge in cases.
China, Germany and Japan are also battling new outbreaks with some reintroducing containment measures.
The spike in infections increased nervousness in global markets, which mostly fell on Monday on news of a worrying jump in fresh cases in several US states including California, Texas and Florida.
German airline group Lufthansa, meanwhile, says it has backup plans ready in case shareholders reject a nine-billion-euro ($10.1 billion) pandemic rescue plan agreed with the state.
– Sports stars tumble –
The sporting world has been reemerging from the darkness, although for every step forward it seems to take one back.
Japan announced that up to 5,000 fans would be able to attend football and baseball games from July 10 but the presence of fans at other sporting events, notably in the Balkans, appears to have caused problems.
Five players from Serbian club Red Star Belgrade tested positive for coronavirus after playing a match attended by 16,000 people, the club said on Monday, reports AFP, Dubai.