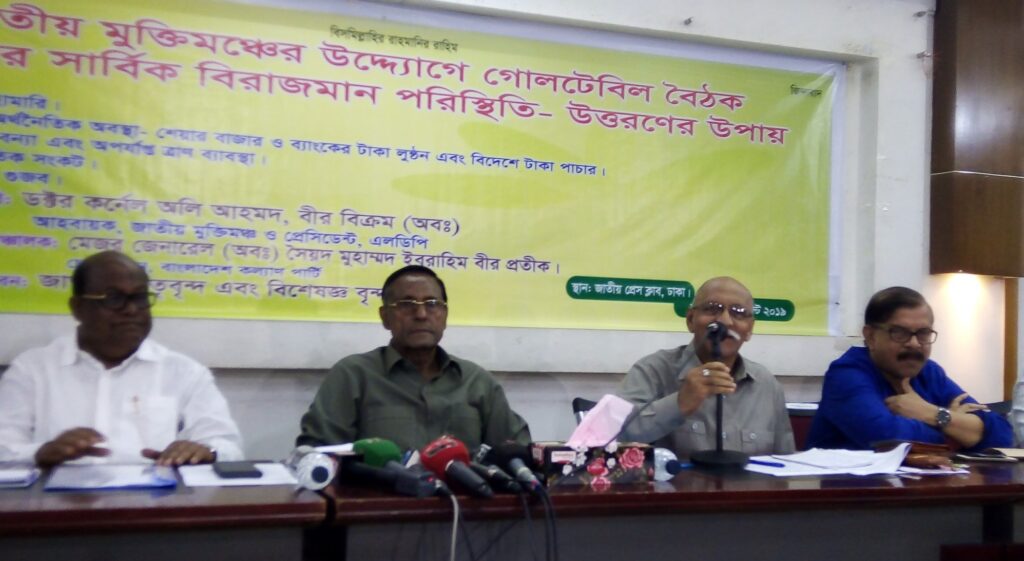 Dhaka, Aug 06 – Col Oli Ahmed, Chairman, Liberal Democratic Party and founder of the Jatiya Mukti Manch on Monday called for unity and selfless movement of all professional groups of people to secure the freedom of the people which, he said, was now lacking in the country.Addressing a roundtable organized by the Bangladesh Kalyan Party at the National Press Club as the chief guest he said that Bangladesh was now running without democracy as the present parliament was not elected by the people.
The roundtable, presided over by Kalyan Party chairman Major General Sayed Muhammad Ibrahim was also addressed by Nagorik Oikya convener Mahmudur Rahman Manna, LDP secretary general Dr. Redwan Ahmed, former secretary to the government Mofazzal Karim, Ehsanul Huda of Bangladesh Jatiya Dal and Mufti Munir of Jamiyate Ulamaye Islam, Shawkat Hossain Masum of Jahangirnagar University among others.
The roundtable dwelt on ‘rumour and divine punishment’, the dengue epidemic, floods and inadequate relief and rehabilitation activities, and political crisis.
Col Oli Ahmed said there was no rule of law and no dispensation of justice in the country which was plagued by corruption. There are banks but depositors cannot withdraw their own money as their money had been taken away.
He said that there are courts in the country but the people are not getting justice. He said, ‘we need to apologise to Allah’ for the present state of things and seek freedom of the people by forgetting about petty individual interests.
Mahmudur Rahman Manna dwelt at length on the dengue situation which, he said, was alarming but the health minister and the two mayors of Dhaka City Corporations were shirking responsibility. – Staff Reporter