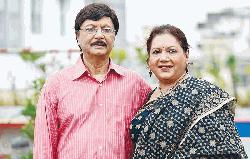 Culture Desk
Senior actor Sohel Rana made his debut as an actor with Masud Rana in 1974. He acted opposite National Award winning actress Kabori Sarwar in the film. Now after more than four decades the two are joining for yet another big screen production. Titled ‘Ei Tumi Shei Tumi,’ Kabori would direct the film with grant from the government. This is about to be Kabori’s second film as a director. Kabori has also finished writing story, screenplay and dialogue for the film by herself as its shooting is set to start in October.
Sohel and Kabori’s performance in Masud Rana was lauded by many quarters for what was their first joint project. Its song ‘Moner Ronge Rangabo, Boner Ghum Bhangabo’ lip-synced by Kabori was the one that first brought the actors together in the film and swiftly took its place in the record chart for all time hits in the Bangladeshi film song industry. The duo then went on to appear in two more films ‘Prem Bandhan’ and ‘Gopon Kotha’. But after the 70s they were neither seen in the big screen nor in the small screen. In 2017 though the two appeared in a TV drama-series titled ‘Abar Ashibo Fire’ in what would be their first drama together. This was again, Kabori’s first drama series direction.
Both Kabori and Sohel claim that Sohel was selected for ‘Ei Tumi Shei Tumi’ during a friendly-chat at Sohel’s residence in Uttara in the capital. There while discussing politics, country, society, the issue of Kabori’s upcoming film came up. Sohel already knew the plot from a previous discussion and knew that it has a character that suits his demeanor. Thus as the issue came up again, he suddenly quipped, “I will also be with this project. Why are you leaving me out of it?” Seeing his earnest straightforward approach Kabori was startled and consequently Sohel was roped in for her project.
About Sohel, Kabori reflects that she values him not only through his good acting but also through good nature. An actor becomes unique through his conduct both on-screen and off-screen. Sohel was a student-leader and also an elected-VP of a resident hall at University of Dhaka during the Pakistani regime. He was also a Freedom Fighter during the Liberation War in 1971.
Sohel Rana on his part respects the fact that Kabori has remembered him for his second film project. He hopes that he would again get to meet some of his friends from the old age.