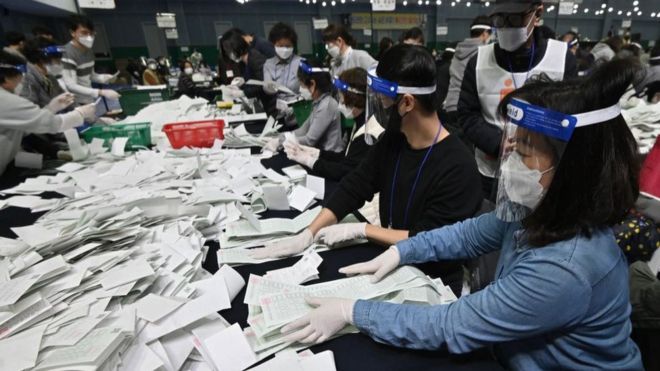 More than 200,000 people worldwide have now died with the coronavirus, figures from Johns Hopkins University show.
There are more than 2.8 million confirmed cases of Covid-19, according to the tally.
It comes after the number of fatalities in the US passed 50,000, as Americans endure the world’s deadliest outbreak. Chinese state media reported the first known death linked to the virus on 11 January. More than 210 countries and territories have since reported cases.
Five countries have now reported death tolls above 20,000 although the way fatalities are counted varies widely.
The US, Italy and Spain have seen the highest number of reported fatalities. The UK’s Department of Health announced on Saturday that more than 20,000 people had now died with coronavirus in UK hospitals.
Home Secretary Priti Patel described the figure as a “tragic and terrible milestone” and said, “the entire nation is grieving”.
As the UK’s daily data does not include people who die at home or in nursing homes, the true figure is certain to be higher.
France, which does include deaths in care homes in its statistics, said its toll had risen by 369 on Saturday.
There have been 22,614 virus deaths in France since the start of March, but health officials say the mortality rate in hospitals is falling, and the number of people in intensive care has dropped for the seventeenth consecutive day.
Among the latest developments:
• The World Health Organization (WHO) says patients who have recovered from the virus may not be protected against re-infection
• New York state Governor Andrew Cuomo says he will authorise independent pharmacies to carry out tests for Covid-19. He said he would also expand screening for antibodies at four hospitals, starting with essential workers. The state has recorded more than 16,000 deaths
• The lockdown has caused a surge in the number of people contacting the UK’s Revenge Porn Helpline – a government-funded service for adults experiencing intimate image abuse
• An orphanage in Belarus has appealed for government help after 13 disabled children and 10 staff members were infected with coronavirus
Resurgence in some regions
Earlier this week, the head of the World Health Organization (WHO) highlighted upward trends in Covid-19 cases in Africa, Eastern Europe, Central America and South America.
Dr Tedros Adhanom Ghebreyesus said that while most of the epidemics in Western Europe appeared to be stable or in decline, for many countries the disease was just getting started.
“And some (countries) that were affected early in the pandemic are now starting to see a resurgence in cases,” he said.
One such country is Singapore, which was initially praised for its success in containing the virus, but has since seen a surge of infections linked to industrial worksites and tightly packed worker dormitories.
Elsewhere in Asia, Chinese authorities reported no new deaths for the tenth consecutive day on Saturday, and South Korea had its second day without a death.
Why it’s difficult to compare between countries
Statisticians have cautioned that a reported death toll may not always give the full picture of a country’s epidemic.
The US has seen the most virus deaths of any individual country, for example, but also has a far larger population than most.
With 330 million people, its population exceeds the total number of people living in the five largest countries in Western Europe – the UK, Germany, France, Italy and Spain.
Many European countries have reported more deaths per head of population than the US, and Europe as a whole has reported more deaths overall.
Death rates also depend on who is counted. Some countries are including deaths in care homes in their data, giving a fuller picture, whereas others only count deaths in hospitals where Covid-19 has been confirmed.
Belgium has a figure of 6,917 deaths in a population of 11.4 million. More than half the country’s deaths have been in care homes for the elderly and are based largely on suspected cases, which makes the country’s data look much worse.
– BBC News