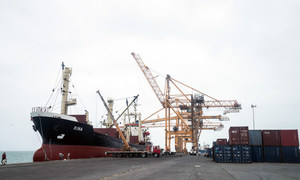 The UN has announced that a deal has been reached with both parties at war over the key Red Sea port of Hudaydah in Yemen. In a statement, the UN said in the daily briefing on Tuesday that it had brought together delegations from the Government of President Abdrabuh Mansour Hadi and Houthi opponents, on board a vessel “on the high seas off Hudaydah”.
This was their first face-to-face meeting since February, the UN statement continued, adding that the belligerents “took stock” of their earlier agreements on the redeployment of forces from Hudaydah.
The Saudi Kingdom is in a bid to find a political solution to the conflict. – UN News