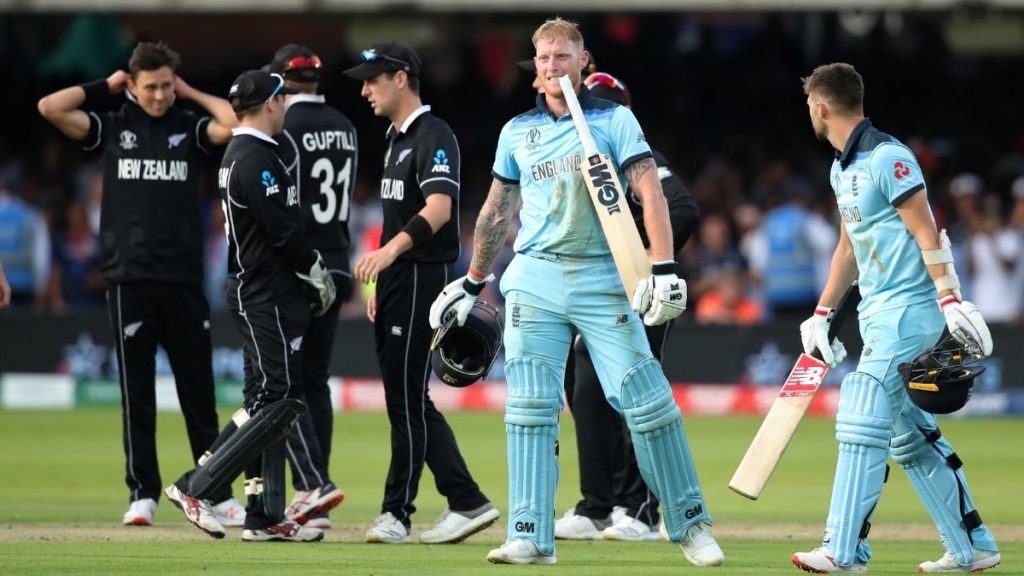 ICC Cricket World Cup 2019: Former ICC elite panel umpire Simon Taufel said England should not have been awarded 6 runs for the overthrow in the final over of their chase against New Zealand in the World Cup final at Lord’s on Sunday.
Legendary umpire Simon Taufel has said the on-field umpires’ decison to award 6 runs for the controversial overthrow in the final over of England’s chase against New Zealand in World Cup 2019 final is an “error in judgement”.
Questions are being raised as to whether the umpires were right in awarding 6 runs for the overthrow when only 5 runs should have been awarded, as per International Cricket Council rules.
England were chasing 242 for their maiden World Cup triumph but they were bowled out for 241 despite a well-paced 84 from Ben Stokes. The match ended as a tie and Super Over was played to decide the champions. Incidentally, the Super Over also ended as a tie and England were crowned world champions as they had scored more boundaries during the final.
In the tense final over of the match, when New Zealand needed 9 runs off the last 3 balls, the overthrow gave England extra runs.
England were awarded 6 runs for an overthrow after the ball deflected off Stokes’ bat. Stokes was trying to complete a double at the striker’s end but before he could reach the crease, the ball ricocheted off his bat to the boundary. 6 runs for England in a tense final over.
Stressing that the decision on the overthrow was a clear mistake, Taufel added that it is unfair to say that the overthrow costed New Zealand the final and eventually their first World Cup triumph.
“It’s a clear mistake it’s an error of judgment. In the heat of what was going on, they thought there was a good chance the batsmen had crossed at the instant of the throw,” Simon Taufel told foxsports.com.au.
“Obviously TV replays showed otherwise.”
“The difficulty you (umpires) have here is you’ve got to watch batsmen completing runs, then change focus and watch for the ball being picked up, and watch for the release (of the throw). You also have to watch where the batsmen are at that exact moment,” Taufel added.
“It’s unfair on England, New Zealand and the umpires involved to say it decided the outcome.”
What the ICC rules say?
19.8 Overthrow or wilful act of fielder
“If the boundary results from an overthrow or from the wilful act of a fielder, the runs scored shall be any runs for penalties awarded to either side and the allowance for the boundary and the runs completed by the batsmen, together with the run in progress if they had already crossed at the instant of the throw or act.”
New Zealand captain Kane Williamson, who was graceful in defeat, spoke about the overthrow while speaking to the press after the heartbreaking loss in London on Sunday.
“No-one probably thought they would have to sort of result to some of that stuff. But yeah, very tough to swallow. A great game of cricket and all you guys probably enjoyed it,” Williamson said.
Courtesy: India Today