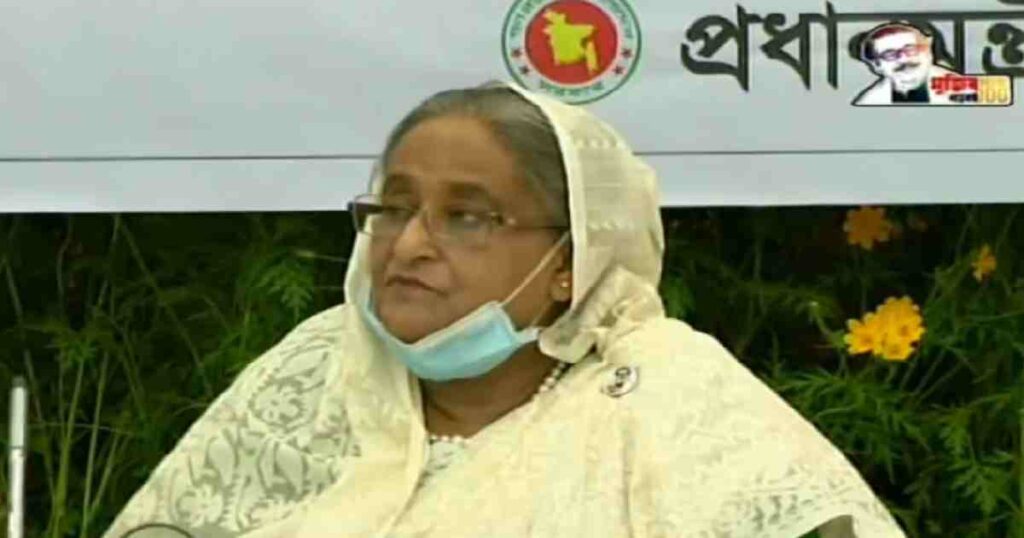 Dhaka, Aug 23 – Prime Minister Sheikh Hasina on Sunday renewed her allegations that Khaleda Zia was involved in the August 21, 2004 grenade attack as her husband Ziaur Rahman was behind the August 15, 1975 killings.“Ziaur Rahman was involved in the killings of the Father of the Nation, four national leaders…he killed army personnel through coups one after another. Khaleda Zia just did the same thing after coming to power,” she said.
The Prime Minister said this as she joined a discussion virtually from her official residence Ganobhaban.
Father of the Nation Bangabandhu Sheikh Mujibur Rahman Birth Centenary Celebration National Implementation Committee organised the programme at the International Mother Language Institute, marking the 45th martyrdom of the Father of the Nation and National Mourning Day.
She said Ziaur Rahman had made collaborators like Abdul Alim, Maulana Mannan and Shah Aziz ministers, prime minister and advisers.
Following Zia’s footstep, Hasina said, Khaleda Zia also made ministers Nizami, Mujaheed and culprits involved in the intellectuals’ killings.
The Prime Minister mentioned that Khaleda Zia made killer Rashid and Huda members of parliament.
“If there was no link with them, why did Khaleda Zia pave the way for them to sit in Parliament snatching the voting rights of people in the February-15 farcical election? They (Ziaur and Khaleda) always patronised those who were involved in terrorism and killing,” she said.
Talking about the August-15 massacre, the Prime Minister said the main aim of the conspirators was to destroy the ideal of the Independence as they could not tolerate the victory of Bangalees.
“Those who were with Pakistan during the Liberation War also could not accept our victory. There were conspiracies (against the country), from the day we attained our victory …there were a deep-rooted conspiracy against our victory,” she said.
Regarding the involvement of Ziaur Rahman in the Bangabandhu killing, she said that killers Faruq and Rashid in their statement had told that Ziaur Rahman was with them always and being empowered by these killers Ziaur Rahman later proclaimed himself as the president of the country.
Sheikh Hasina said by selecting Ziaur Rahman as the army chief Khandaker Mustaque had proved that they were together in this conspiracy.
About the August-21 grenade attack, she said Khaleda Zia and her government were involved in that attack and that is why after the grenade charge police and law enforcement personnel had charged baton on those who tried to rescue the injured and take them to hospitals for treatment.
“They drove away the party leaders and activists from the spot to clear the path for the culprits to flee the scene,” she said.
The Prime Minister said the advancement of the country has been halted due to the coronavirus pandemic, but the government is trying hard to put the country back on its previous track for economic progress.
“We’ve one aim and that is to materialise the ideals of the Father of the Nation for which he liberated t the country. We’ll try our best to materialize the dreams of the Father of the Nation for Bangladesh to change the fate of people,” she said.
Awami League advisory council member Amir Hossain Amu, MP, Law Minister Anisul Huq and Professor of Dhaka University History Department Dr. Abu Md. Delwar Hossain also spoke at the programme.
President of the Father of the Nation Bangabandhu Sheikh Mujibur Rahman Birth Centenary Celebration National Implementation Committee Professor Rafiqul Islam gave the vote of thanks while Chief Coordinator Dr Kamal Abdul Naser Chowdhury delivered the welcome speech.
The Prime Minister also inaugurate an exhibition of paintings and pictures titled ‘Muktir Mohanayak’ digitally, which is taking place at the International Mother Language Institute.
A documentary on Bangabandhu was also showed in the programme. Eminent cultural personality Asaduzzaman Noor, MP recited a poem written by renowned poet Mohadeb Saha. – UNB