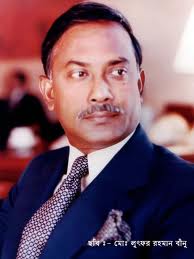 Dhaka – Protesting the Prime Minister’s remark about their party founder, BNP senior leader Khandaker Mosharraf Hossain on Monday said Ziaur Raman was not an illegal president as he was elected with people’s votes.

“The Prime Minister made derogatory remarks about Ziaur Rahman in parliament yesterday (Sunday) without any reason. They say Ziaur Rahman was an illegal president. He was elected with people’s votes in a general election held in 1978, not through vote robbery what Awami League did at night on December 29,” he said.

Mosharraf came up with the remarks while speaking at a rally took out by Jatiyatabadi Mohila Dal in front of BNP’s Nayapaltan central office, marking its 41st founding anniversary.

He said the current government is calling Zia illegal to hush up its illegal ‘usurpation’ of power by rigging vote the night before the 11th parliamentary election.

On Sunday, Prime Minister Sheikh Hasina told parliament that BNP founder Ziaur Rahman and Jatiya Party Chairman HM Ershad were illegal president as the higher court declared illegal the grabbing of power by both of them.

Mosharraf said Awami League had annihilated democracy by establishing one-party Baksal rule in 1975 and rigging vote on December 29 while Zia introduced multiparty democracy and his wife Khaleda Zia save the country from the autocratic rule of Ershad.

He said people are now passing through a critical time due to ‘misrule’ of the current government and its failure to run the state. “The economy has got destroyed while banks have been plundered. Social anarchy and the incidents of repression on women and children are growing while corruption is now everywhere. People want to get rid of such a situation.”

The BNP leader urged their party leaders and activists, including female ones, to get united to free their party chairperson Khaleda Zia from jail and ‘restore’ democracy in the country.

“Autocratic rulers could not survive in the country in the past, and the current one will also not be able to hang onto power. People will give them a befitting reply at the right time.”

Speaking at the programme, BNP senior joint secretary general Ruhul Kabir Rizvi said Baksal was established by abolishing Awami League, and the party was revived following an application by an Awami League leader during Zia’s Rule. “So, if Ziaur Rahman is illegal, then Awami League and the current Prime Minister are also illegal.”UNB