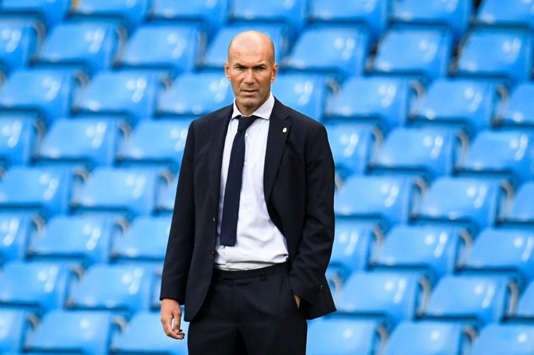 MANCHESTER, United Kingdom – Real Madrid coach Zinedine Zidane said he remained “proud” of his team for their achievements this season despite the Spanish giants going out of the Champions League to Manchester City in the last 16 on Friday.

Trailing 2-1 from the first leg at home back in February, before the coronavirus shutdown, Real lost by the same scoreline at an empty Etihad Stadium to go out 4-2 on aggregate, with two Raphael Varane mistakes directly leading to City’s goals.

“We can’t be happy about today because we have lost a game and gone out, but we have to be proud of what we have done over the season,” Zidane said after the match.

Real overhauled Barcelona to win La Liga for the first time since 2017 thanks to a fine run of 10 successive wins following the long shutdown.

However, they have now been knocked out of the Champions League for the first time with Zidane as coach — the Frenchman led Real to glory in the competition in three straight years during his first spell in charge between 2016 and 2018 before returning to the job last year.

Varane was robbed of possession in the ninth minute by Gabriel Jesus, allowing Raheem Sterling to give City the lead.

Karim Benzema equalised on the night to keep the tie in the balance, but a short headed backpass by Varane midway through the second half allowed Jesus to steal in and secure the victory for City.

“We had opportunities to score at 1-1 but didn’t take them. We are not looking for excuses, that’s just the way it is,” added Zidane

“We lost two games against a good side. We had chances to score and in the second half we played better, but that’s football.

“Ninety-five percent of what we did this year was excellent. We have to be very proud of the team, of what we have done this season.”BSS/AFP