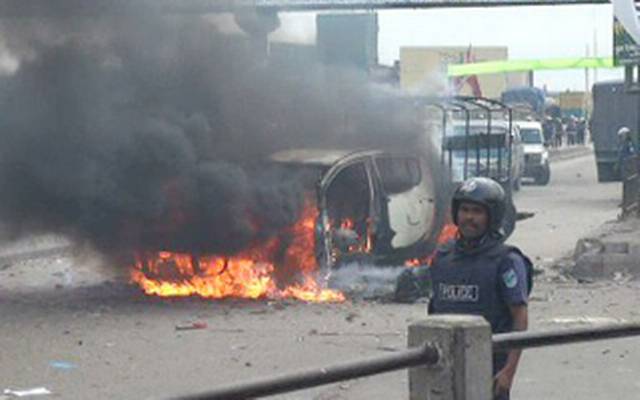 At least 22 people, including two policemen and a member of Border Guard Bangladesh (BGB), were killed and over 200 others injured, 100 with bullets, in a series of clashes between the activists of Hefajat-e-Islam and police in Sadar upazila on Monday.At least 35 vehicles were also vandalised and torched on a three-km area from Kanchpur to Signboard during the violence.
Law enforcers fired several thousand rubber bullets, Chinese rifle bullets and teargas shells and sound grenades to bring the situation under control.
The deceased cops were identified as constable Zakaria Mollah, 44, son of late Akbar Ali of Baliapara village in Bhanga upazila, and Nayek Feroz Khan, 53, son of Kanchan Khan of Noyapara village in Alfadanga upazila of Faridpur district. The deceased BGB man is Shah Alam.  All of the other deceased are passersby.
Ten of them are Saiful Islam, 35, a salesman of a cloth shop in the city and son of late Hasem Contractor of Painadi in Siddhirganj; Polash, 25, owner of a workshop at Madaninagar; Jasim Uddin, 30, a bus helper; Zahidul Islam Saurav, 17, an HSC examinee and son of Enamul of Nimaikashari Baghmara in Siddhirganj; Masum, 30; Hannan, 35, in-charge of iron department of Al Amin Sweater Factory at Siddhirganj; Babu Gazi, 36, a bus driver and a resident of Naria in Shariatpur; Sadeque, 32, son of Rais Miah of Demra who used to supply filtered water to different shops; Habibullah, a rickshaw-puller and son of Abul Munshi of Jarchara in Kachua of Chandpur; and truck helper Mizanul Haque.
Rumours were flying around that Dania College student Badhan, 17, Bada, 17, of Rani Mohal in Demra and Khaled, 28, of Dogair in Demra were also killed in the clashes.
On information that Hefajat men took shelter at Madaninagar Madrasah, a joint force drawn from police, Rapid Action Battalion and Border Guard Bangladesh (BGB) tried to conduct a raid on the institution around 6am.
At one stage, the madrasah students urged locals on the loud speakers of its mosque to resist the law enforcers. The clash ensued when hundreds of locals with sticks and other locally-made weapons attacked the joint force in response to the call.
Later, the clashes spilled over into the three-km area from Kanchpur to Signboard and continued till the afternoon.
Of the injured, two BGB members—Shah Alalm and Lablu—and five policemen—constables Zakaria, Pannu Mia, Lavlu and Harunur Rashid, and Nayek Feroz, Armed police sub-inspector Solaiman—were rushed to Dhaka Medical College Hospital where Shah Alam, Zakaria and Feroz were pronounced dead by doctors.
The unruly activists of the Islamist group also attacked Siddhirganj Power Station and Kanchpur police camp during the clash.  Several journalists and photojournalists also came under attack by the Hefajat men during the violence.
The unruly Hefajat men beat Jugantar photojournalist Shamim Nur and vandalised his motorcycle when he tried to take photos in front of Madaninagar Madrasah.
They also manhandled Jugantar Fatullah correspondent Javed Ahmed Jewel when he came in the help of Shamim.  A vehicle of ‘Channel i’ was set on fire while its cameraman Habib was beaten and his camera and laptop were taken away.
Banglanews24.com Narayanganj correspondent Tanvir Hossain, local journalist Imran, photojournalists Saurav Laskar of New Age, Mehedi Hasan Sajib of Daily Samakal, Mohammad Kaiyum of local Desher Alo, Taposh Saha of Ittefaq, Shipon Ahmed of Focus Bangla and Bishal Ahmed were also attacked by the unruly Hefajat men.
The injured were rushed to different hospitals and clinics.  Seven platoons of BGB have been deployed in the area to maintain the law and order, said deputy commissioner Manojkanti Boral.
Claiming the situation was now under control, police super Syed Nurul Islam said traffic resumed on Dhaka-Chittagong and Dhaka-Sylhet highways around 2pm.
Three people were gunned down and 25 others injured in a clash between Hefajat-e-Islam activists and law enforcers in Hathazari upazila on Monday.  The deceased were identified as Mamun Miah, teacher of a local kindergarten and hailed from Rajshahi, Mohammad Hanif, 35, and Mohammad Mamun, 24, of the upazila.
Witnesses said the Hefajat men blocked Rangamati-Khagrachhari road at Medical Gate in the morning protesting the raid on Shapla Chattar in the capital removing the Hefajat men.
The clash ensued when police asked them to withdraw the blockade around 3pm.
A chase and counter-chase took place between the Hefajat men and the law enforcers comprising police and members of Rapid Action Battalion (Rab), Border Guard Bangladesh and Armed Police Battalion during the melee.  At one stage, the law enforcers fired several gunshots to disperse them, leaving three killed on the spot and others injured.
The injured were rushed to Chittagong Medical College Hospital. Traffic on Rangamati-Khagrachhari road came to a halt following the incident. UNB

The Islamists smashed up atleast 150 vehicles, while eight belonging to police, BGB and state-run BRTC were set on fire, he said.
A police traffic police outpost was also burnt down.
Dhaka Medical College and Hospital (DMCH) police Camp Inspector Mozammel Haque confirmed the identity of the dead law-keepers as BGB trooper Shah Alam and police constables Zakaria and Firoz.
At least eight people, including two policemen and a Border Guard Bangladesh (BGB) trooper, were killed when clashes between Hifazat-e Islam supporters and law-keepers erupted in Narayanganj on Monday morning.
BGB trooper Lavlu, Police SI Sulaiman and Pannu were admitted to the hospital in critical condition, he said.
Another unidentified body recovered from the site of the clashes has been kept at Maa Medical Lab in Narayanganj’s Shimrail More, its emergency unit Doctor Abdul Quaiyum said.
Some more hit by bullets have been admitted there, he said.
In the afternoon, a van driver’s assistant Nizamul Hauque, 28, and one Marzanul Haque, 16, were brought to DMCH after they received bullet wounds, Inspector Mozammel Haque said.
Van driver Azim said they parked their vehicle and were repairing it when clashes began and Nizamul was hit by bullet.
Both Nizamul and Marzanul were declared dead by doctors on arrival at the hospital.
Bodies of two ready-made garment workers, Masum, 32, and Abdul Hannan, 30, were brought to Narayanganj’s Thanpur Hospital, the hospital’s doctor Nazim Uddin said.
Twenty police and BGB men were receiving treatment at the hospital, he said.
Meanwhile, Border Guard Bangladesh (BGB) Director General Major General Aziz Ahmed visited DMCH, during which he spoke to media.
He said Hifazat supporters, while leaving Dhaka, were joined by ‘some miscreants’ in launching a blockade and acts of vandalism, he said. Police and BGB were attacked when they tried to chase them away.
After Hifazat supporters were flushed out from Dhaka, they blocked the Dhaka-Chittagong highway at three areas of Kanchpur and Siddhirganj locality in Narayanganj on Monday morning, SP Nurul Islam said.
The clashes began at around 7am on Monday after an intense stand-off, bdnews24.comNarayanganj Correspondent reported.
The Hifazat supporters moved from the highway around 10:00am, but continue to pelt the police and borderguards with brickbats in adjoining areas, he reported.
(Source: bdnews24.com)