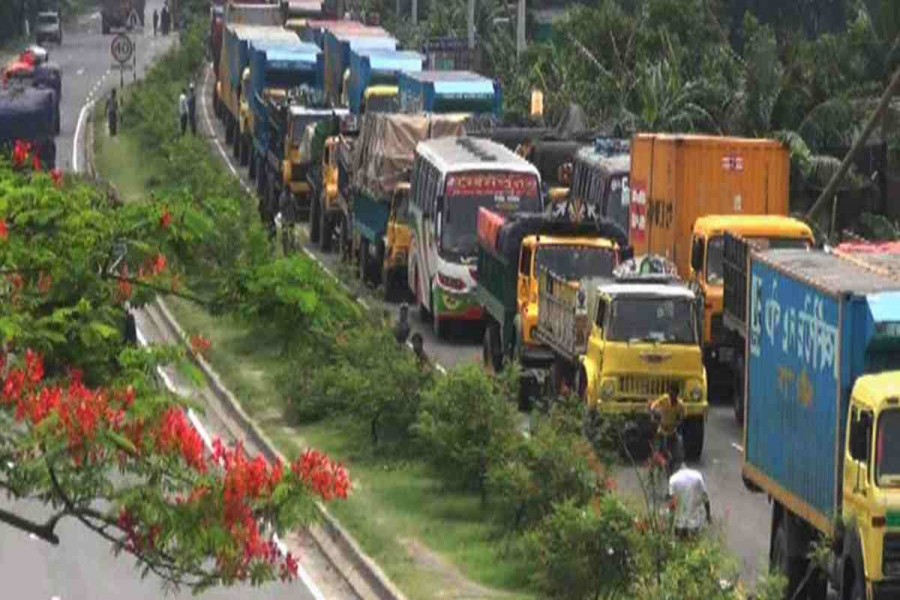 Savar, May 9 :  A 20-km tailback has been created on Dhaka-Aricha ,ohighway due to the mad rush of homebound people ahead of Eid-ul-Fitr defying the restriction on movement amid the Covid-19 pandemic .Visiting the highway, the UNB correspondent found that a long queue of vehicles on the road, stretching from Savar Bus Stand to Gabtoli Bridge area.
People including women and children are set to go to their village home to celebrate Eid with their near and dear ones ignoring heath safety protocols.
In absence of public transport, people hired microbus, pick-up vans, and private vehicles to leave Dhaka.
Besides, many people were seen travelling on goods-laden trucks.
A traffic police wishing not to be named said the tailback has created due to heavy pressure of private vehicles alongside the public transport.
Some long-route passengers said they boarded local bus from Savar and their destination was Amin Bazar. Later, they crossed the bridge on foot and boarded another bus from Gabtoli to reach their respective destinations.
Anwar Hossain, a resident of Gabtoli, said “I along with six of my family members started journey around 6 am. Now it’s 11:30 am. We are still at Amin Bazar point.”
Arnab Shaha, a student of Jahangirnagar University, said “I boarded a Savar-bound bus around 10 am. Now it’s 12:45 pm. The bus is stuck at Baliarpur for the last two hours. I have no idea whether I can go home before Iftar.”
However, people are so reluctant in maintaining health guidelines and social distance though the government has allowed intra-city transport services on condition of maintaining health guidelines, reports UNB.