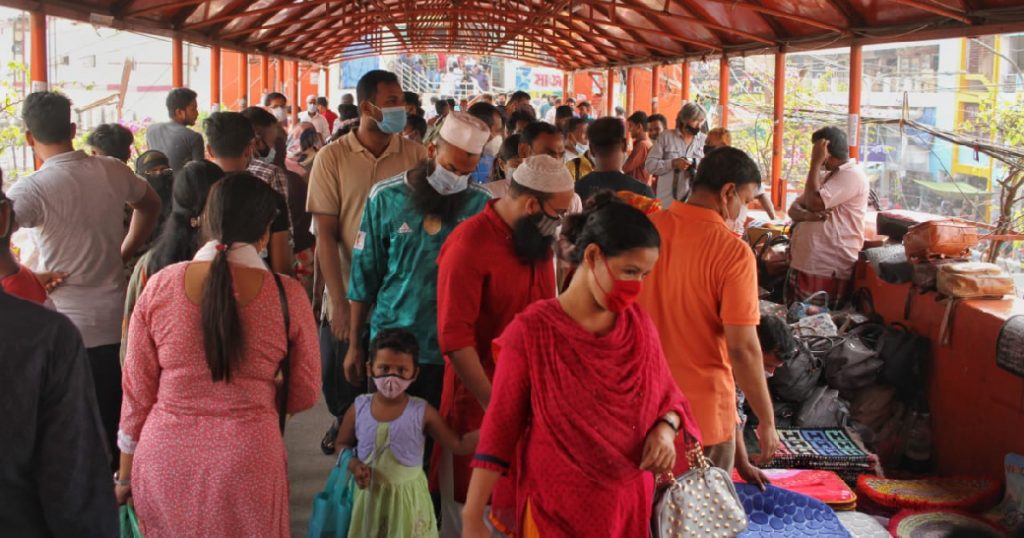 Dhaka, May 9 :  Bangladesh reported 56 more Coronavirus-related deaths and 1,386 new cases in a 24-hour period until Sunday morning.The Directorate General of Health Services (DGHS) said the latest fatalities took the country’s death toll to 11,934 while the mortality rate remained static at 1.54 percent.
Besides, the DGHS said, the new cases were detected after testing 16,915 samples, pushing up the total case count to 773,513. Bangladesh has so far carried out 5,630,894 tests.
After a massive upsurge, the number of daily cases fell below 2,000 since May 1. There has been a steady decline in the number of tests since April 28. The number of testes rose again over 20,000 on May 4, 5 and 6, according to corona.gov.bd.
The daily infection rate fell to 8.19%, which was 8.74% a day before, according to the DGHS.
The number of Covid deaths came down to as low as 50 after over a month on Wednesday.
Bangladesh saw 50 deaths on April 1 and it had kept rising since then.
The daily death toll soared to over 100 on April 16-19 and on April 25 but has been falling gradually since then.
According to the DGHS, 3,329 patients recovered in the past 24 hours, putting the recovery rate at 91.81%.
The country reported its first coronavirus cases on March 8 last year and the first death on the 18th of that month.

Dhaka has remained the worst-hit region, recording 6,922 fatalities or 58% of the total deaths until now.
Twenty-two of the 56 virus-related deaths recorded today are from Dhaka and 21 from Chattogram.

A confirmed case of Indian Coronavirus strain was detected in Bangladesh on Saturday, the Institute of Epidemiology, Disease Control and Research (IEDCR) confirmed.
The Indian strain was detected in a sample test at Evercare Hospital in Dhaka and it has been published in Global Initiative on Sharing All Influenza Data (GISAID), said IEDCR’s chief scientific officer ASM Alamgir.
Two more confirmed cases of Indian Coronavirus strain were detected at the Genome Centre of Jashore University of Science and Technology on the same day.
India reported over 4,00,000 new Covid-19 cases on Saturday, taking the caseload to over 2.2 crore. With 4,133 new deaths, the toll now stands at over 2,42,000, reports UNB.