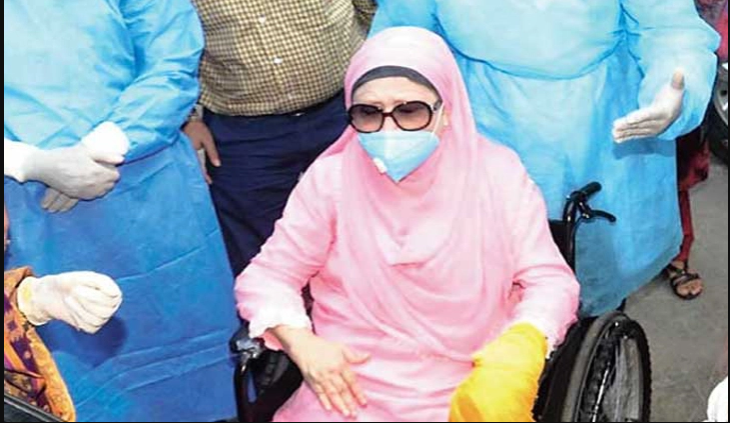 Dhaka, May 9 : The government on Sunday turned down the application of BNP Chairperson Khaleda Zia’s family seeking permission to send her abroad for advance treatment as there is no scope for her to avail of such a scope, said Home Minister Asaduzzaman Khan.“The Law Ministry has informed us that there’s no legal provision to allow convicted Khaleda Zia to go abroad for treatment. In the light of such an opinion, the application of her family can’t be granted,” he told reporters at his Secretariat office.
The minister said they will soon inform the BNP chief’s family about their decision.
He said the Law Ministry made it clear that as Khaleda was earlier given a facility by suspending her sentences under section 401, now there is no scope to waive her sentences after reconsidering the same section for the second time.
Asaduzzaman said they received the application of Khaleda’s family on humanitarian grounds and sent it to the Law Ministry for its legal opinion. “We’re doing everything as per the law. BNP can apply (for sending Khaleda abroad, but we can’t do anything beyond the law.”
Talking to UNB, Law Minister Anisul Haq said there is no chance of allowing Khaleda Zia to go abroad for medical treatment. “I’ve sent my legal opinion in this regard to the Home Ministry.”
“Khaleda Zia’s sentences have been suspended as per section 401 of the Code of Criminal Procedure (CrPC), on condition that she can’t go abroad. So, there’s now no scope to grant her family’s application by relaxing this condition,” he explained.
He said when a decision has already been made as per section 401 of the CrPC, the function of this section is over regarding her and there is no scope to reopen it. “So, she (Khaleda) can’t be sent abroad.”
BNP Secretary General Mirza Fakhrul Islam Alamgir may come up with the party’s official reaction to the government decision after visiting Khaleda at Evercare Hospital at night.
Meanwhile, M Asaduzzam, a pro-BNP lawyer, described the law minister’s explanation as per-incuriam.
He said Section 401(1) of the CrPC says, “When any person has been sentenced to punishment for an offence, the Government may at any time without conditions or upon any conditions which the person sentenced accepts, suspend the execution of his/her sentence or remit the whole or any part of the punishment to which he/she has been sentenced.”
The section 401 (4A) says: “The provision of the above sub-sections shall also apply to any order passed by a Criminal Court under any section of this Code or of any other law, which restricts the liberty of any person or impose any liability upon him or his property.”
“As per these sections, the government has the scope to allow Khaleda Zia to go abroad.. it’s the government’s inherent power,” Asad opined.
He said the government can allow any person to go abroad even if any court imposes any travel ban on him/her.
On Wednesday last, Khaleda’s younger brother Shamim Iskander met Home Minister Asaduzzaman Khan at his Dhanmondi residence and submitted an application seeking permission to send her abroad for advanced treatment.
Later, the application was sent to the Law Ministry for its opinion.
Law Minister Anisul Haq on Sunday morning sent his ministry’s opinion to the Home Ministry.
The 76-year-old BNP chief, who tested positive for Covid-19 for the second time on April 24, was admitted to Evercare Hospital on April 27 for a thorough health checkup.
She was shifted to the CCU of the hospital with shortness of breath around 4pm on Monday last. Her breathing problem later eased.
On April 28, a 10-member medical board, headed by Prof Shahabuddin Talukder, was formed for the treatment of Khaleda at the Evercare Hospital a day after her admission there.
Khaleda Zia tested positive for Covid-19 on April 10 as eight people at her residence were infected with the virus. She underwent the second Covid-19 test on April 24 and her report was positive.
Meanwhile, Khaleda Zia tested negative for Covid-19 on Saturday, 27 days after she had been infected with the deadly virus.
Amid the coronavirus outbreak, the government freed Khaleda Zia from jail for six months through an executive order suspending her sentences on March 25 last year, reports UNB.