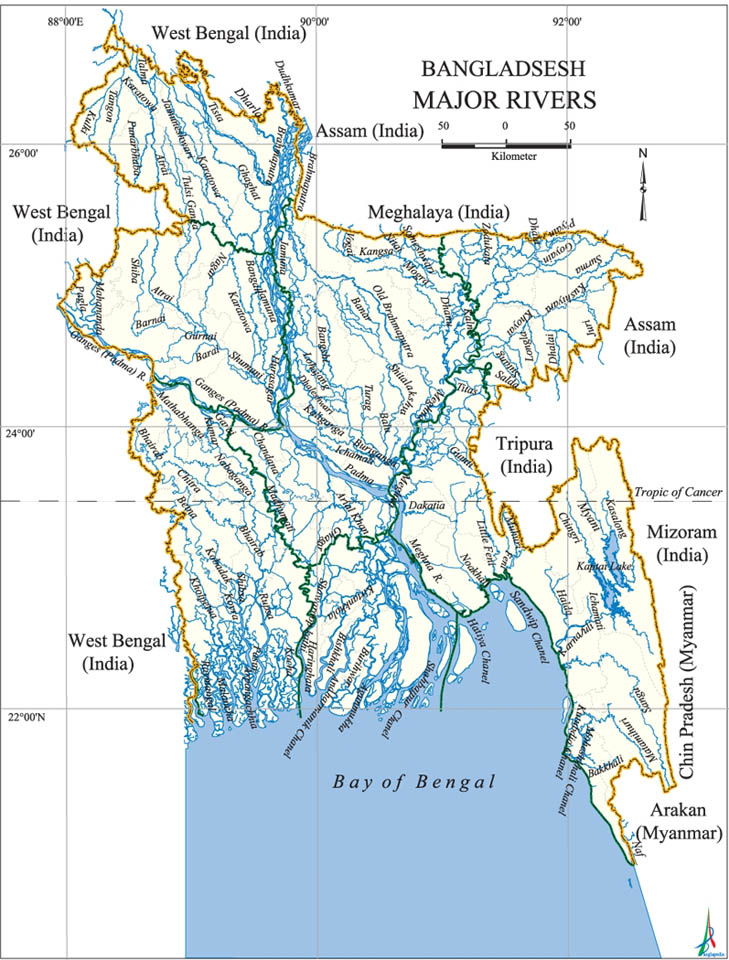 Dhaka, Aug 30 – Bangladesh and India need to opt for sustainable management of rivers to keep those alive from the points of origin to their outfall into the sea through basin-wide management which is now the universally accepted formula of sharing rivers.

Leaders of the two countries only need to consult their water and environment experts to reconfirm and accept this and further strengthen their bonds of friendship, the international environmental organization and water rights watch group, IFC, has said in a statement on Friday, August 30.
The statement has come in the wake of the assertion of Indian External Affairs Minister Dr Jaishankar that Bangladesh and India are working to find ‘mutually acceptable formulas’ to share water from 54 common rivers keeping India’s commitment to resolving the Teesta issue unchanged.
Leaders of the IFC (International Farakka Committee) referred to decisions given by the apex courts in Bangladesh and India declaring rivers as living entities and said that the two neighbouring countries are thus also legally and ethically bound to keep the common rivers alive.
Dr Jaishankar has been quoted to have told reporters at the close of his two-day visit to Dhaka on August 21, “We look forward to making a progress to find mutually acceptable formulas to share water from our 54 shared rivers.” He also said that they are ready to make a start wherever it is possible.
The IFC leaders said, given this goodwill, leaders of the two friendly countries should have a long-term and holistic view of the said formula and give up the mistaken notion of sharing river water at the border which is political, not natural.
The rivers are natural entities. They shape the environment, ecology, life and livelihoods in the countries of the region. They cannot be divided at borders. The 30-year Ganges Water Sharing Treaty of 1996 has proven this because the water apportioned by the treaty is not available at downstream in Bangladesh.
Quoting experts the IFC leaders said, the rivers should have minimum 20 percent of historical flows in their beds during the lean season to remain alive. In the rainy season flows of the rivers should be adequate to recharge water in the floodplains for groundwater availability in the lean season for drinking as well as other productive purposes.
Bangladesh owes its origins to the great Himalayan rivers that formed the deltaic country and its ecosystem over the millennia. Life and livelihood in Bangladesh are dependent on these natural systems. Fall of water flow in the Ganges-dependent areas of Khulna and Rajshahi divisions in Bangladesh depressed economic activities, lowered the rate of income growth and threatened the Sunderbans, Unesco-declared World Heritage Site. If people cannot lead sustainable life due to manmade environmental disasters, they would only be compelled to look for better income opportunities away from home.
The IFC leaders said barbed wire fence at the border would not be needed to stop the movement of people from Bangladesh to India for jobs if the people can have a happy and prosperous life and income opportunities at home.
The International Farakka Committee leaders also drew the attention of the leaders of the two countries to the fact that diversion of flows of rivers from their natural courses to dry areas leads to their death. The floodplains through which rivers flow help keep the rivers alive during the lean season with seepage water. Drylands on the other hand only soak away flows and in time lead to deaths of rivers.
The latest trend is thus decommissioning of dams to restore rivers and their basin-wide management to keep those alive not only for the present generation but also for the posterity. America, Europe and Japan have decommissioned thousands of dams with salutary results. The dry Amu Daria in Central Asia has surged back to life. India, Bangladesh and other countries of the region cannot continue to commit the same mistakes that Europe and America are now mending.
They said the World Water Forum, the Global Water Partnership, the UN Environment Programme and the Paris Deal are all for sustainable basin-wide management of rivers for the sustainability of the environment. Bangladesh and India cannot but accept this formula of river management instead of making a narrow focus only on the share of their water, because this can only lead to drying up of the precious rivers with devastating blows to life and livelihoods they support.
The signatories to the statement are: Atiqur Rahman Salu, chairman and Sayed Tipu Sultan, secretary-general, IFC, New York; Prof. Jasim Uddin Ahmad, president, Dr SI Khan, senior vice-president, IFC, Bangladesh, and Mostafa Kamal Majumder, Coordinator, IFC.