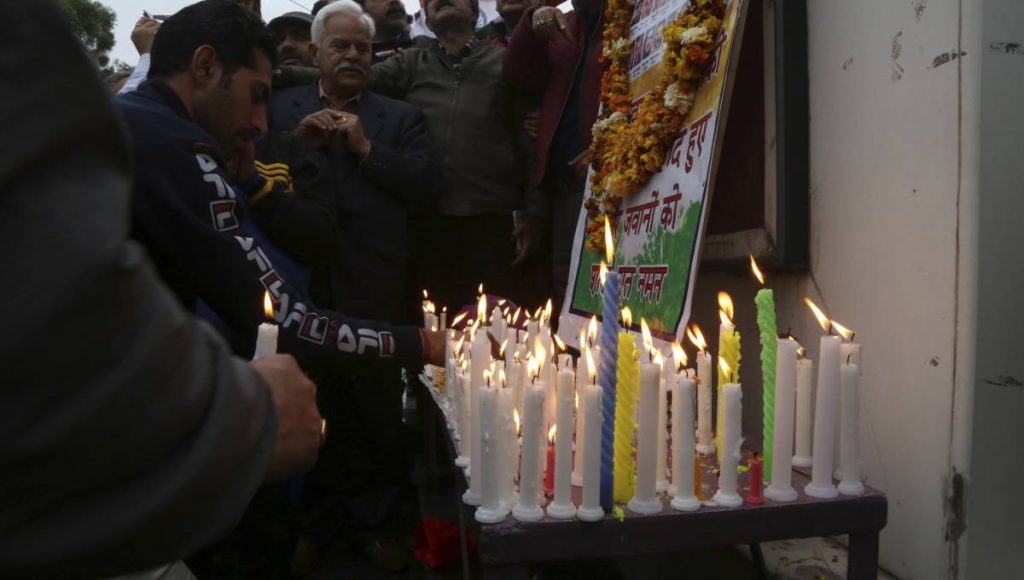 Another soldier was wounded in the gunbattle, which came after a local Kashmiri militant rammed an explosive-laden van into a paramilitary bus on Thursday, killing at least 40 soldiers in the worst attack against Indian government forces in Kashmir’s history.

The fighting erupted early Monday after government forces surrounded a village in the southern Pulwama area on a tip that militants were hiding there, security officials said. As troops began conducting searches they came under heavy gunfire, leading to fatalities, police said.

Local residents said troops destroyed one civilian house by explosives during the fighting. Police said they recovered the bodies of two militants from the debris. A civilian was also killed in the crossfire, police said.

The dead soldiers included an Indian army major. The wounded soldier was reported to be in critical condition.

The fighting triggered anti-India protests and clashes in the village, with local residents, mainly youths, trying to march to the site of the gunbattle in solidarity with the rebels. Government forces fired tear gas at stone-throwing protesters. No one was immediately reported injured in the clashes.

In recent years, mainly young Kashmiris have displayed solidarity with the rebels and sought to protect them by engaging troops in street clashes during India’s counterinsurgency operations despite repeated warnings from the Indian authorities.

Tensions have escalated in the region since Thursday’s attack, which India blamed on Pakistan, promising a “jaw breaking response.” Pakistan warned India not to link it to the attack without an investigation, saying that it was part of New Delhi’s “known rhetoric and tactics” to divert global attention from human rights violations in Kashmir.

Archrivals India and Pakistan each administer part of Kashmir, but both claim the region in its entirety. Rebels have been fighting Indian control since 1989. Most Kashmiris support the rebels’ demand that the territory be united either under Pakistani rule or as an independent country, while also participating in civilian street protests against Indian control.

The anti-India unrest grew especially after a popular rebel leader was killed in 2016. The Indian government responded with stepped-up anti-rebel operations, leading to more protests.

About 70,000 people have been killed in the uprising and the ensuing Indian crackdown since 1989.