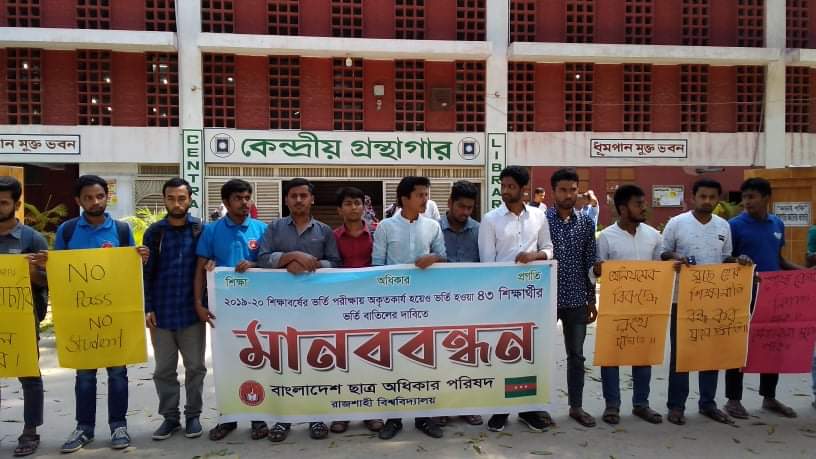 Rajshahi, March 10 – The authorities of Rajshahi University (RU) enrolled at least 43 children and grand-children of its teachers and officials under ward quota who failed to secure the minimum marks to pass the entrance examinations held on 21-22 October last year. Even, they enrolled a student on special permission who secured to pass mark on the test.However, different organizations criticized the university decision for enrolling them without passing mark.
The university authority published a notice on the university website on October 31 that reads the admission test sub-committee is allowing three applicants to be admitted into the university under B unit (Business Studies Faculty and Institute of Business Administration).
The university authorities also published another three notices on the university website that showed that they allowed the 43 admission seekers to be admitted to the university under the 2019-20 academic year.
The authorities enrolled a total of 18 such students in different departments under the ‘A’ unit (arts, law, fine arts, and social science faculties). Documents also show that the authorities allowed 7 failed applicants under science and engineering facilities, and 18 failed aspirants under the business studies faculty and in IBA.
According to the admission circular, the admission seekers must achieve 40 out of 100 marks in entrance exams but all them secured less than marks on the test.
A-unit (arts, law, fine arts, and social science faculties) Admission Test Committee chief coordinator Professor Ahsan Kabir told that the Admission Test Sub-Committee in a meeting presided over by the vice chancellor M Abdus Sobhan had recently decided to allow the dependants, who had secured 30 marks, to get themselves enrolled in the university.
He, however, could not mention the exact date of the meeting and reason behind lowering the required marks.
Contacted, B Unit BBA Admission Test Committee chief coordinator AK Shamsuddoha told that the sub-committee has allowed Nargis Khatun on special power as she was a renowned footballer.
Besides, Admission Test Sub-Committee in a meeting presided over by the vice chancellor M Abdus Sobhan had recently decided to allow the dependants, who had secured 30 marks, to get themselves enrolled in the university that’s why we allowed to them to enrol on the campus.
Deputy registrar (academic) AHM Aslam Hossain refused to comment on the issue, and suggested to talk to the vice-chancellor and the registrar.
When contacted over phone, registrar Professor MA Bari said he was on leave and refused to make any comment. VC Abdus Sobhan could not be reached over phone despite repeated attempts.
‘As students did not admit on the faculty, seeing the situation, the admission test committee member took such kind of decision,’ said university pro vice chancellor Prof Dr Ananda Kumar Saha
However, Chief coordinator of C unit Prof Dr Md Ekramul Hamid said, ‘University is place where they give emphasis on merit and RU also should evaluate merit. But RU made wrong decision by giving them scope to enrol here. The students, who failed to secure pass mark in the examination, we should not do it like a university.’
On the other hand, additional director of the institutional Quality Assurance Cell (IQAC) Prof Dr Pranab Kumar Panday said, ‘University is a competitive place for meritorious students and RU also asked about pass mark in the admission as it maintain quality. By enrolling them name of word quota who failed to secure to pass in the examination, it will tell it is unethical and authority should have maintain quality education rules and regulations.’
Demanding cancellation of their enrolment, the leaders and activists of ‘Bangladesh Chatra Odhikar Parishad’ of RU unit formed human chain program at in front of university central library around 12 pm on Tuesday. However, they also submitted memorandum to university vice chancellor Prof Dr M Abdus Sobhan at administration building on the campus.
They also submitted five point demands including cancellation of 43 student’s enrolment and to take proper step such like no decision has taken further, administration role to play role as monitor but they have to refrain them from illegal controlling, reform existing quota at RU.
They also urged the authority to fill up the demands; otherwise, they would go to tougher movement.
This year, a total of 780, 90 students applied against 4,713 under three units. 31, 129 students applied for A unit (faculty of arts, social science, law, and institute of education and research) while 15, 732 students applied for B unit (faculty of business and IBA, institute of Business Faculty) and 31,229 student for C unit (Science, life and earth science). However, ‘A’ unit has 27 departments, 6 departments for B unit and 25 department for C unit. – RU Correspondent