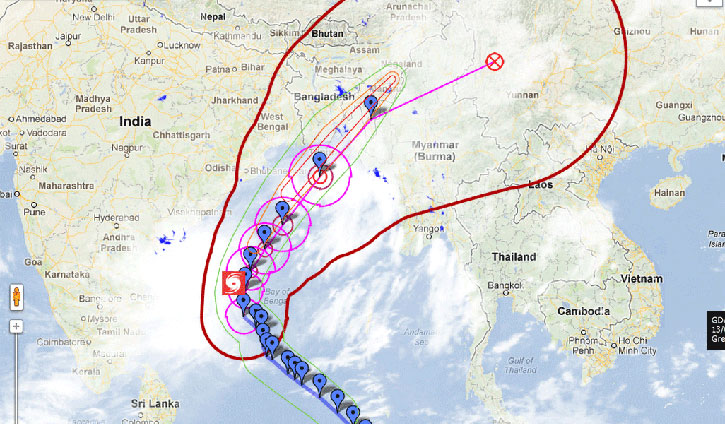 At least seven people have died and nearly 3,000 left homeless as the cyclonic storm Mahasen caused heavy rains in the north and eastern parts of Sri Lanka.The Disaster Management Centre here said that at least 7 people were killed, while two more are missing as a result of the storm.
“We have four displaced camps for over 2800 people marooned by the storm,” Lal Sarath Kumara, a spokesman for the centre said.
The tropical cyclone that developed in the southeast Bay of Bengal over the last few days has now slowed down and is located 750 kms northeast off
Jaffna, Jeewan Karunaratne of the Colombo weather office said.
Landslide warnings were also issued in the hilly districts. Some of the hilly areas has seen torrential rain.
Some 60 fishing boats that defied weather warnings had to be rescued from the the eastern coast of the island nation, officials said.
Meanwhile, the minister of disaster management, Mahinda Amaraweera said that he has informed the officials to do away with the name Mahasen to identify the storm.
Some nationalist groups claimed Mahasen was a Sinhala King who brought prosperity to the island. Thus, it was wrong for a destructive cyclone to be named after him, they argued. banglanews24.com