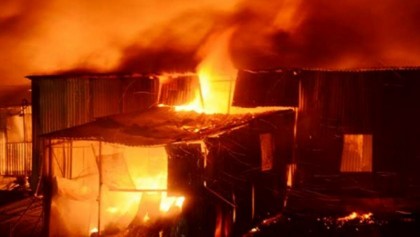 At least 70 shanties were gutted in a fire that broke out in a slum near Narayanganj Zila Parishad office here early Friday.

Abdullah Al-Arefin, deputy assistant director of Narayanganj Fire Service and Civil Defense, said the fire broke out in a shanty of the slum on Dhaka-Narayanganj link road around 3 am and spread soon.

On information, seven firefighting units went to the spot and extinguished the blaze after one hour of frantic efforts.

Traffic movement on the busy road remained suspended for an hour following the fire incident.