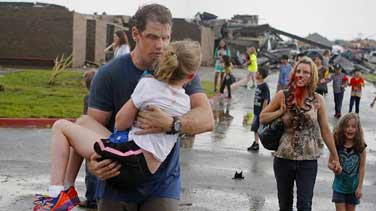 (Courtesy NBC News via msn news)An enormous tornado roared through the Oklahoma City suburbs, killing at least 51 people, including 20 children Monday. The twister pulverized entire city blocks, left behind miles of mangled cars and splintered wood, and destroyed an elementary school where seven children were found dead.Crews frantically searched the wreckage and were only beginning to get a sense of the destruction when night fell hours later. Officials warned the death toll could climb. At one hospital, 85 patients, including 65 children, were being treated for minor to critical injuries.
“The whole city looks like a debris field,” said Mayor Glenn Lewis of the city of Moore, which appeared to be the hardest hit.
At least seven of the dead children were killed at Plaza Towers Elementary School, where the tornado tore the roof off the school about 3 p.m. A teacher told NBC affiliate KFOR that she draped herself on top of six children in a bathroom to shelter them. Officials said the dead children drowned in a pool of water at the decimated school.
It was not clear how many children still were missing. Students in fourth, fifth and sixth grade were evacuated to a church, but students in lower grades had sheltered in place, KFOR reported. More than two hours after the tornado struck, several children were pulled out alive.
The twister was a mile wide at its base, according to The Weather Channel, and a reporter for KFOR said the tornado kicked up a cloud of debris perhaps two miles wide. The National Weather Service initially classified the storm as an EF4, the second-strongest type, with winds of 166 to 200 mph.
“It seems that our worst fears have happened today,” said Bill Bunting, a National Weather Service meteorologist in Norman, Okla.
Even before the death toll began to climb, television footage showed a landscape shattered — not the arbitrary damage of a tornado that leaves some homes untouched, but vast and utter obliteration.
Emergency workers stepped gingerly around piles of wreckage left on the foundations of homes. Other people simply walked around dazed, marveling that nothing was left of their houses — and in many cases that they themselves were alive. Fires broke out in several places.
“I lost everything,” one man said as he walked through the ruins of a horse farm. “We might have one horse left out of all of them.”
Tiffany Thronesberry told The Associated Press that her mother, Barbara Jarrell, called her and screamed: “Help! Help! I can’t breathe! My house is on top of me!”
At one hospital in Moore, cars were “piled like Hot Wheels” in the parking lot, and police were searching them one by one and spray-painting X’s to mark them clear of victims, said Kurt Gwartney, news director for radio station KGOU.
An Oklahoma emergency management spokesman said a hospital was being evacuated after sustaining severe damage, and 16 ambulances were being sent to move patients. It was not clear whether it was the same hospital.
The tornado struck at mid-afternoon and tore a 20-mile path, said Rick Smith, another weather service meteorologist. He said it was on the ground for 40 minutes. Much of the storm’s rampage was captured on live television, perhaps alerting people in its path to seek shelter.
President Barack Obama declared a major disaster, making federal aid available to people in fove counties. Gov. Mary Fallin asked the people of Oklahoma for patience and promised: “We will bring every single resource out that we can.”
Relief efforts sprang up. The Red Cross said it was opening a shelter, and the University of Oklahoma opened some of its housing for displaced families.
In addition to Plaza Towers, Briarwood Elementary School was heavily damaged, KFOR reported.
Search and rescue teams converged on a staging area at the Warren Theater, which was also damaged, as the tornado churned toward other Oklahoma towns. The storms were expected to continue through the evening.
Grasping for comparisons, some people said it looked like Joplin, the Missouri town virtually wiped off the map two years ago when a tornado — this one an EF5 — blew through and killed 158 people.
Joplin city officials said Monday they were sending a team of 10 officers and three firefights to Moore to help. “Giving back in whatever way we can,” the mayor said on Twitter.
For those living in Oklahoma, the ferocity was reminiscent of May 3, 1999, when a tornado registered wind of more than 300 mph, left 46 dead and damaged or destroyed more than 8,000 homes.
The tornado Monday also came one day after another cluster of storms in Oklahoma that killed two elderly men in the town of Shawnee. Tens of millions of people from Texas to the Great Lakes — an area covering 55 million people — had been warned to brace for more severe weather Monday.
The Sunday storms destroyed mobile homes, flipped trucks and sent people across 100 miles running for cover. In Kansas, a weather forecaster was forced off the air as a tornado bore down on his station.
“You can see where there’s absolutely nothing, then there are places where you have mobile home frames on top of each other, debris piled up,” Mike Booth, the sheriff of Pottawatomie County, Okla., told The Associated Press. “It looks like there’s been heavy equipment in there on a demolition tour.”
Fallin declared a state of emergency for 16 counties on Sunday and added five Monday.
(By Erin McClam, NBC Staff Writer)