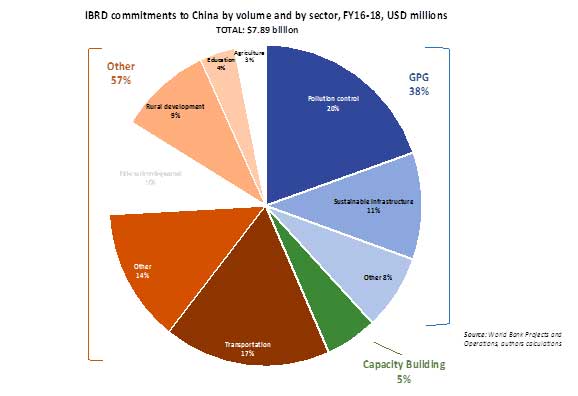 China continues to borrow an average of $2 billion a year from the World Bank, making it one of the Bank’s top borrowers—despite being the world’s second-largest economy and itself a major global lender, according to our study released today.
By doing a project-level analysis of recent World Bank loans to China, we found that the World Bank’s International Bank for Reconstruction and Development (IBRD)—which offers loans to middle-income and credit-worthy lower-income countries—has loaned more than $7.8 billion to China since the country surpassed the bank’s “graduation” income threshold for lending in 2016. The World Bank’s current threshold to trigger IBRD country graduation discussions is $6,895 in gross national income (GNI) per capita.
Lending to countries above this threshold has been controversial, with the United States particularly critical of ongoing lending to China. Critics have pushed for strict graduation standards that would make wealthier borrowers ineligible for bank loans (i.e., “graduation”). Under the 2018 agreement, World Bank shareholders agreed to limit loans to countries above the threshold to only projects that focus on:
• global public goods (projects that benefit the world at large); and,
• capacity-building (projects that help the countries “graduate” away from World Bank lending).
shown in the figure above, less than half of China’s lending has gone to either of the approved categories, by strict definitions of these categories, since China crossed the income threshold in 2016. Capacity-building projects contribute to only 5 percent of its portfolio, and global public goods make up 38 percent of China’s borrowing portfolio.
However, a broader conception of capacity-building, which focuses on the allocation of resources to the poorest provinces within China improves that picture. Fifty-eight percent of lending to China has been directed to provinces with per capita incomes below the graduation income threshold.
And with a third of the portfolio supporting the reduction of carbon emissions in the country, the bank is meeting a clear global public good mandate. As the world’s largest polluter, China will need to make sizeable investments in climate-friendly finance if we are to make meaningful progress on this critical agenda.
The world has a lot to gain from a sustainable and productive China-World Bank relationship. To lower political heat from the United States and other critics, the Bank should request more from China in terms of interest charges on loans and ensure that all project lending adheres to the 2018 standards.