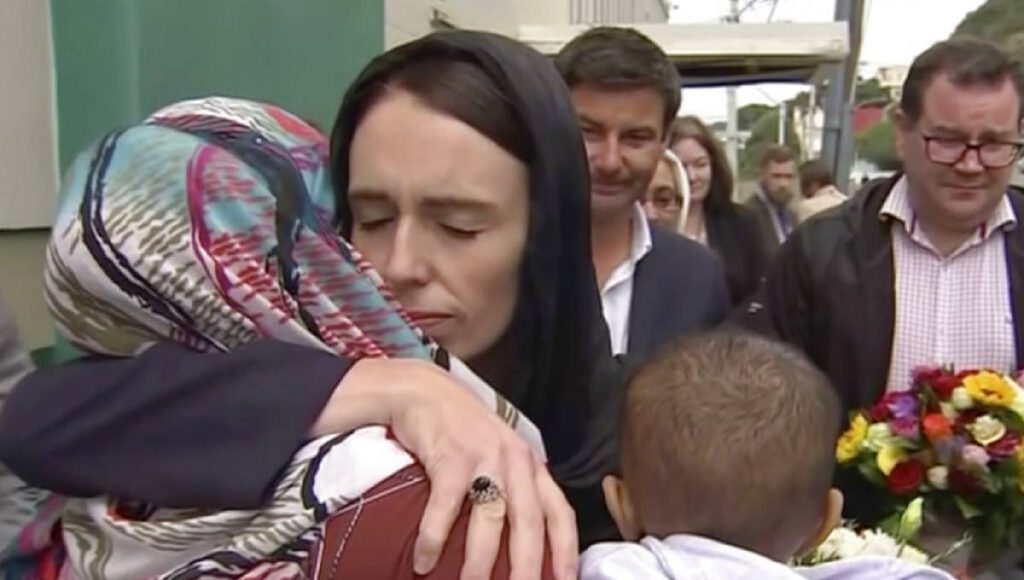 Christchurch, Mar 17 (AP/UNB)— The attributes that helped Jacinda Ardern rise to become New Zealand’s leader at age 37 include her optimistic outlook and bright personality. And she became an inspiration to working women around the world last year when she gave birth to a daughter, Neve.

But the prime minister is now displaying other qualities to an anxious nation after a terrorist on Friday slaughtered 50 people at two Christchurch mosques. She’s shown a determination to change gun laws and a deep empathy with the families of the victims and the Muslim community.

On Friday afternoon at a simple table laid in a hotel conference room in New Plymouth, a city on New Zealand’s North Island, Ardern told the nation about the shootings. Details were sparse, but her shaken demeanor, a tremor in her voice, made it clear the situation was grave.

When she next spoke from Parliament in Wellington she was calmer, more resolute. She gave details of a mounting death toll and of an offender in custody, an Australian man who had chosen New Zealand for his crime.

“You may have chosen us,” she said. “We utterly reject and condemn you.”

When President Donald Trump called Ardern to offer his sympathies and ask what assistance the U.S. might provide, Ardern said she would welcome sympathy and love toward Muslim communities. It was a rebuke, of sorts, toward the perception of Trump as being anti-Islamic.

On Friday, Ardern flew to Christchurch. She donned a simple hijab and met with families of those killed and wounded.

At a refugee center, she told Muslim leaders that the country was united in its grief.

“This is not New Zealand,” she said. “The only part of the incident and actions that we have seen over the past 24, 36 hours that is New Zealand is the support that you are seeing now.”

Ardern did not avoid the thorny political issues arising from the shooting, the question of how the gunman obtained five firearms, including two military-style weapons. New Zealand’s liberal gun laws allow easier access to those weapons than in Australia.

“I can tell you right now our gun laws will change,” she said.

She demanded her intelligence agencies explain why they knew nothing about the terrorist, who emailed a manifesto outlining his plans to Ardern’s office minutes before the shooting.

She promised immediate financial assistance to survivors, including families who had lost their only breadwinner or who faced the cost of funerals.

Friday’s events where the first major test Ardern has faced since she became prime minister in a contentious general election in 2017. She had only become leader of the liberal Labour Party a few weeks earlier when the party had slumped to its lowest-ever poll rating.

She immediately boosted its popularity, attracting a new constituency to Labour through her youth and optimism. It disguised a tough and experienced political operative.

When Ardern was elected prime minister she had already been a lawmaker for nine years, starting as New Zealand’s youngest sitting member of Parliament. She had previously been a researcher for New Zealand Prime Minister Helen Clark and a policy adviser to Tony Blair, the British prime minister at the time.

She is progressive but pragmatic, willing to woo big business and shelve difficult liberal issues that might alienate a larger constituency.

Until Friday, her toughest task had been to hold together the brittle and disparate political coalition between her Labour Party and two other parties, the Greens and New Zealand First.

Since taking office, Ardern has become an international celebrity and a counterpoint to the rise of populist leaders. But her popularity abroad has masked domestic difficulties. There were political missteps, minor scandals, dissent with coalition partners.

In the week before the Christchurch shooting, Ardern’s major political challenges had been dealing with the fallout from a proposal to introduce a capital gains tax and complaints of a conflict-of-interest affecting one of her ministers.

On the day of the shooting she was to address schoolchildren participating in a global classroom strike and protest against inaction on climate change. Ardern is a fierce advocate for combating global warming and it was an event at which she’d usually be in her element.

But on Friday, the trajectory of her leadership irrevocably changed.