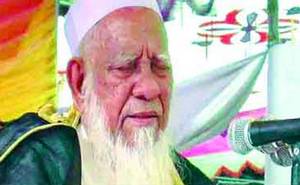 Hefazat-e-Islam Bangladesh ameer Shah Ahmed Shafi has directed his followers to keep their morale up and take preparations for a movement to realise their 13-point demand. He gave the directive when a delegation of Narayanganj district and city units of Hefajat met him at his Hathazari Madrasah in Chittagong on Sunday. District Hefajat member secretary Maulana Abdul Quader led the delegation.
“Despite the fact that Hefajat now remains absence in the field with programmes or demands, it will again take to the street very soon. For this, all must maintain their high morale and take preparations,” Hefajat Narayanganj city unit member secretary Maulana Ferdousur Rahmam quoted Shah Ahmed Shafi as saying.
During the meeting, the Hefajat chief expressed shock and resentment over the government’s ‘barbarous attack’ on the organisation’s activists in the capital on May 5.
Criticising the government for its various misdeeds, he said it has resorted to falsehood. “Falsehood is now the government’s main capital.”
Hefajat Narayanganj unit leaders Maulan Shamsuddoha, Badrul Alam Sylheti and Mahmud Kashemi were, among others, present.
Some of Hefajat demands include restoring the phrase ‘Complete faith and trust in the Almighty Allah’ in the constitution and repealing all the laws contrary to the holy Quran and Sunnah, enacting a law in parliament keeping a provision of the maximum punishment to prevent defaming Allah, Prophet Hazrat Muhammad (pbuh) and Islam and smear campaigns against Muslims and officially declaring Qadianis (Ahmadiyyas) as non-Muslims.                                    – UNB