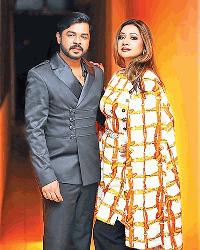 To commemorate the new Bengali year Ankhi Alamgir is heading for Germany on an invitation of Desh Sangskritik Goshthi, Germany. The Gig is scheduled to be held on April 27 at the hall of fame of Frankfurt am Main, Germany. Imtiaz Ahmed, Resident Ambassador to Germany and Ambassador to Czech Republic, Slovakia and Romania will grace the gig as chief guest. Ankhi will be singing all her hit numbers along with the tradition and raw songs of Bangladesh.
She says,” We need to feel the vibes of the target audience and what they would like to hear and with that in mind, we should keep our folk songs alive by making a fusion of them with modern songs.” Another featuring artist will be Shwapnil Shojib. Shwapnil Shojib is Most Famous Tagore Singer in the sub-continent and has traveled USA, UK, Australia, Canada, Brunei, Malaysia, Dubai Germany and India. He is recently been invited to Canada by Bengali Association and Morocco, South Africa for a special cultural night organized by Bangladesh Embassy, Morocco.