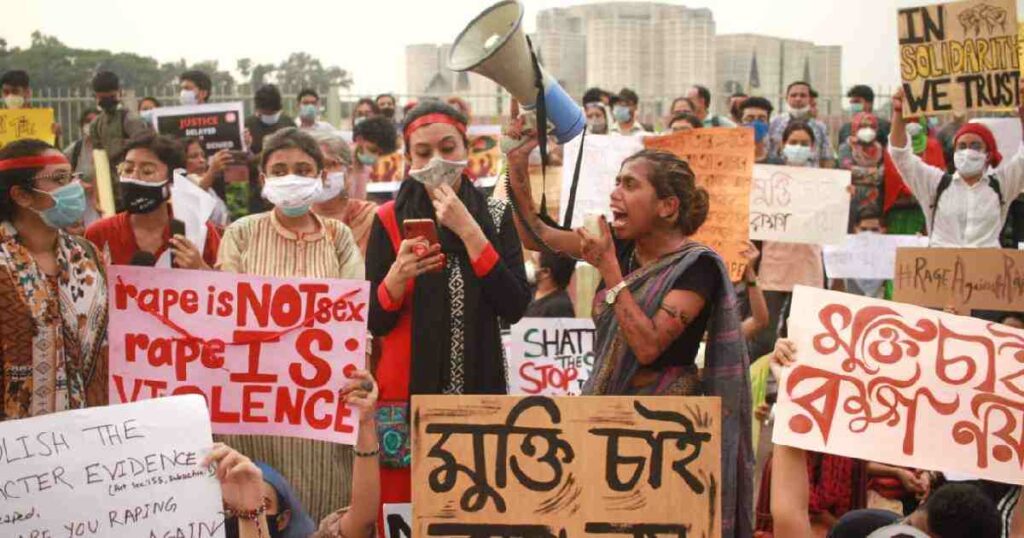 Activists of different organisations, including those working on women’s rights, staged demonstrations on the road in front of the Jatiya Sangsad on Saturday, protesting the growing incidents of rape and demanding the toughest punishment for rapists.

The protesters were chanting various slogans condemning the ‘impunity of rapists’ and demanding prompt action to bring the rapists to book. They were holding placards inscribed with: “Stop protecting rapists”, “Mukti chai, Rokkha Noi”.

Protests against the growing incidents of rape, sexual harassment and violence against women are continuing in different parts of the country. The protesters included general people and leaders and activists from different organisations.

The recent incident of gang rape at Sylhet MC College and a housewife’s molestation in Begumganj of Noakhali fueled the protests.

Some protesters also called for the resignation of Home Minister Asaduzzaman Khan Kamal over the government’s ‘failure’ to rein in the alarming rise in sexual violence against women and girls in the country.

The Law Minister on Thursday said they are putting forward a proposal for bringing an amendment to the relevant law with a provision for awarding death penalty to a rapist as the highest punishment instead of life imprisonment.